Kendra made chocolate chip cookies for Daryl, our reclusive neighbor.  He'll be a tough nut to crack, but we are patient.  We stopped by his house to say hello and be kind.  Come to find out, he is a diabetic.  nothing awkward about that though!  just getting to know everyone one conversation at a time.  so we took the cookies home and ate them. 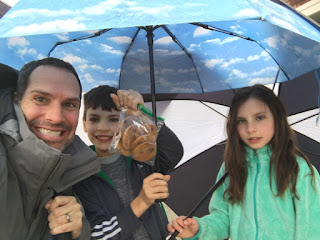 Kendra took some treats down to our other neighbor who is suffering from back pain and prayed for her while she was there.  We are finding tangible ways to bless people and it's been a great transition for us to care so much for those around us in daily life.  I consider our latest revelation to be the most real example of "love god and love others" that I've ever seen. 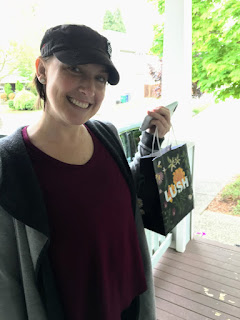 We invited another family in our neighborhood over for dinner a few weeks ago.  The husband and I connected on many levels.  mountain biking is one of them.  He's much more in-shape than I am, but we had an excellent ride even in the pouring rain. 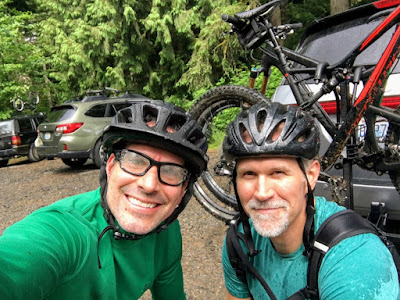 We just survived the biggest campout the 4 Webbs have ever joined.  Family camp for Easton's cub scouts turned out to be a great weekend even with tons of mosquitos and uncomfortable beds.  It was a sacrifice for Kendra, but we made some memories that will last a lifetime.   Max went with us to Jim Creek Navel Recreation area. 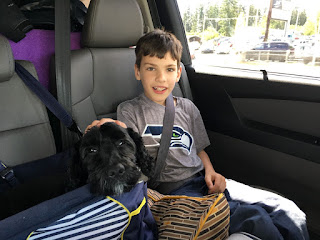 120 other campers lined the massive field where we played and cooked and popped up tents.  I didn't get  a single picture of the 4 Webbs together because there were not many moments where we were all in the same place sitting still.  I did catch this one of Kendra and I with the playground in the back. 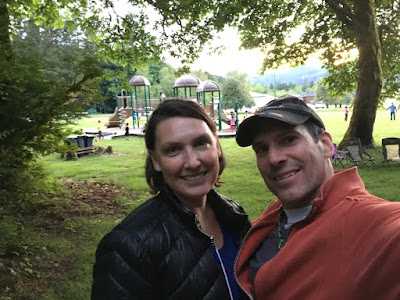 Easton and Layla were very brave and adventurous.  The climbing tower and high swing were great challenges for them to conquer.  The swing was the most memorable, fun thing they both experienced the whole weekend.  They connected to the rope and then were pulled up in the air by a pulley.  then they let go of the tether and swung free. 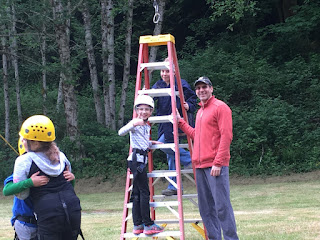 The massive structure behind them in this picture is where they climbed with a safety rope. 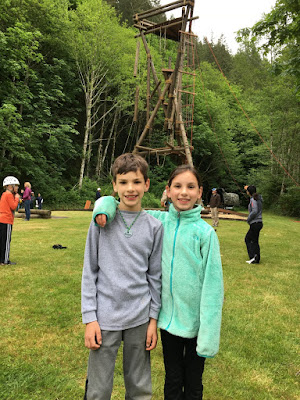 Easton made it to the top.  He paused here on the middle platform to hear us cheer him on.  He was extremely proud of himself for getting to the top and we were impressed with his can-do attitude. 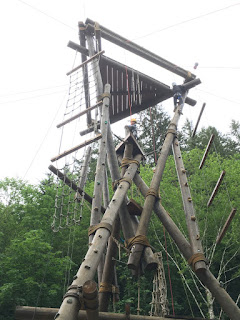 Layla made it to the middle platform and climbed very quickly.  When she made it there, she decided that was enough and she repelled back down.  She is so competitive that she cried for a bit since Easton made it to the top, but she didn't.  we tried to console her and make sure she knows how proud we are of her, but it took a little while for her to be back to her normal sunshine self. 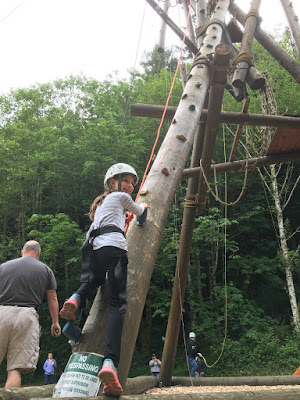 Easton and I played chess on the life-sized board.  I taught him the game again and he gladly took my chess pieces.  I ended up winning, but he put up a good fight considering he is still learning what moves where. 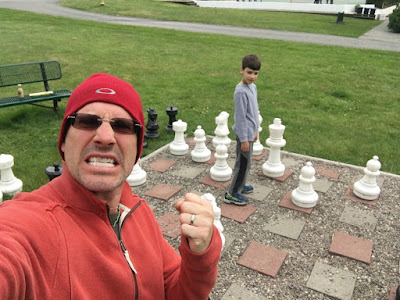 On our way back to camp from the chess match, Easton saw a deer.  We snuck up on it slowly to see how close we could get.  when he was within a few feet, Easton lunged towards the deer and chased it off.  I'm not sure what he would have done if he caught it, but we had some good laughs about this friendly deer afterwards. 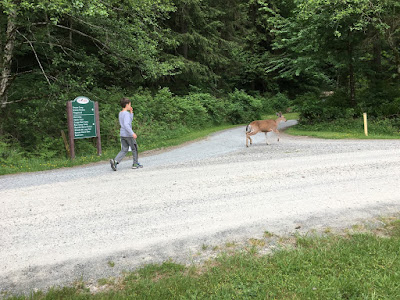 One of the busiest areas of the campground is this massive stump.  they used it as a castle of sorts for their games of clan wars.  With the big man-made playground only a few feet away, it was clear that mother nature has the coolest things. 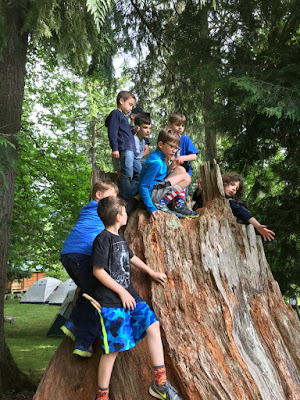 I took a panoramic shot from our tent to show a few of the tents off in the distance and the play area.  Parents spent much of the weekend relaxing her in chairs as the kids just played.

Kendra found a soccer ball abandoned on the playground.  She started dribbling and another kid came by to play.  She kicked the ball back and forth, showing off her fancy footwork for the other kids who were watching.  I took a mental snapshot to freeze-frame the moment.  There are days when I can't believe how amazing Kendra's recovery is and how fortunate we are to have our family be so functional. 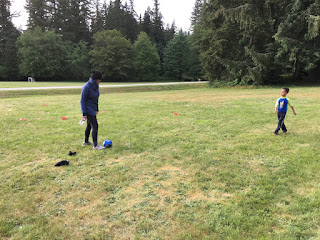 The campout wore Max down to nothing.  He was totally wiped out after two days of running full speed ahead. 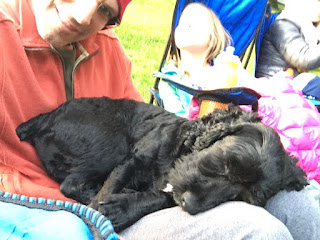 The second night was late.  around 9:30pm the sun was just going down so they broke out the smores.  After that, we ate blue frosted cupcakes.  Bed time was shortly afterwards, but 10:30pm is much too late for our super consistent 8:00pm-bedtime crew.  it was worth the grumpy moments though. 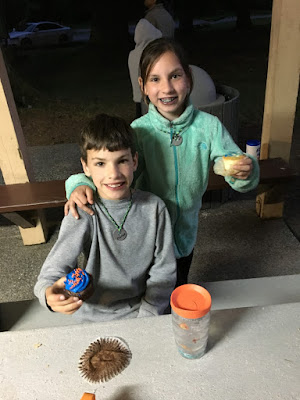 on another day, I worked from home and took a long lunch to go for a walk with Kendra and Max.  These simple pleasures are the ones I appreciate the most.  Other people think this is no big deal, but it is huge considering how far Kendra has come from being bed-ridden with the broken vertebrae.  I'm never going to take this for granted. 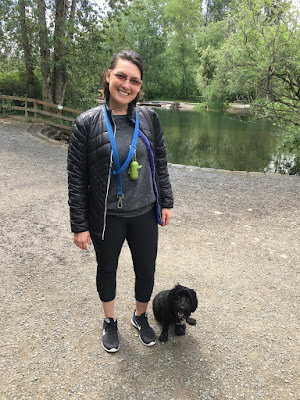 or this...  At Easton and Layla's family dance party, there were two types of parents:  those on the dance floor and those surrounding the dance floor as their kids danced the night away.  We were the dancer parents.  Kendra has no insecurity or concern for other people's opinions. it shows up boldly in these moments where she cuts loose and has a great time being herself. 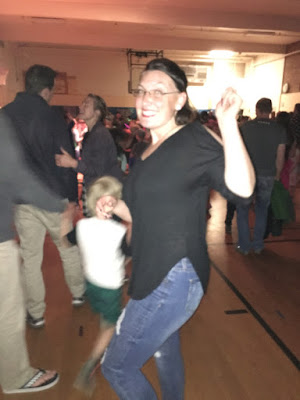 Easton and Layla are still figuring out who they really are.  Part of that discovery is trying new things to find out what each one is passionate about.  Kendra took Layla to her first cheerleading informational meeting as a preparation for the upcoming school season.  Layla is excited to try it out, but her passion for figure skating is still fully in bloom.  You never know how a summer can change people, but we are lining up our next school year really well already. 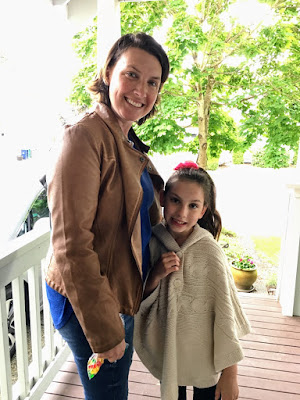