The 4 Webbs are all swell.  Kendra's CT scan last week confirmed she is still cancer free and free to be who she is meant to be.  We survived the rainiest winter in the history of Seattle.  Now it's time for a spring season like we've never experienced and the best summer of our lives.

Layla's eye for beauty is opened wide and being filled with God's glorious nature.  She loves picking flowers, even weeds that look like flowers.  I saw her walking across the sports field and took this picture.  I glanced at the camera screen to see if i caught the image I was hoping for and I stood there in shock wondering, "who is this young lady?"  and just like that...  I'm the father of a young lady. 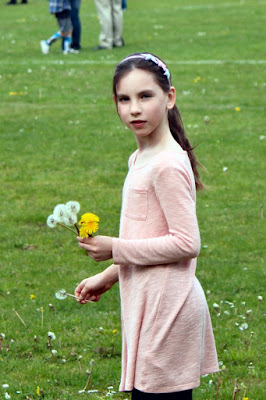 Easton signed up for track and field.  Not because he has a love of sports, but because he thought it would be fun to get out of school 10 minutes early each Tuesday to drive across town to the other schools.  Whatever gets him going!  He practices every day at recess and this was his first "meet".  Layla didn't know that the word meet is synonymous with competition.  She wishes she had signed up because she sees her friends competing, but Layla is just as happy to be a cheer leader for her school.

Easton says there are no girls at his school who have a crush on him, but I am convinced he's just missing out on the signals, which is totally fine by this dad. 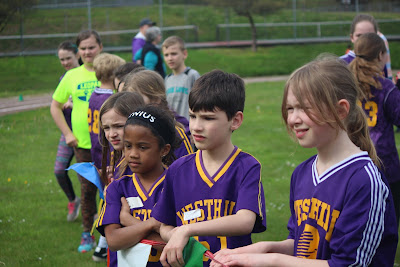 Easton competed in the 75 yard dash, the 400 relay, and kick ball.  His relay team came in second, but when Easton completed his leg of the relay they were in first place.  He's a good runner! 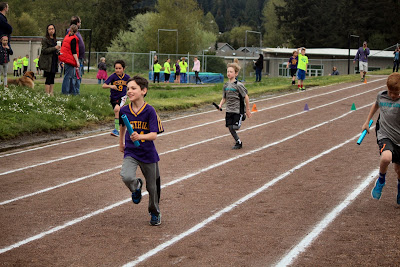 Kendra and Layla provided plenty of cheer support and congratulations to encourage Easton.  in between events they hung out together looking like angels on the field. 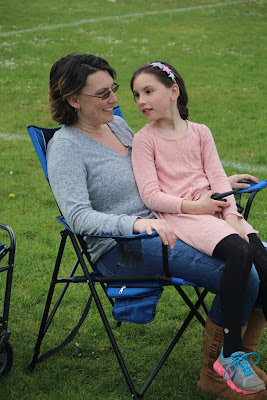 We gave him some pep talks so he would stay out trouble.  He started climbing the trees on the school property and some other boys followed his lead.  I'm glad he's a leader, but he's figuring out how to lead in the right direction... 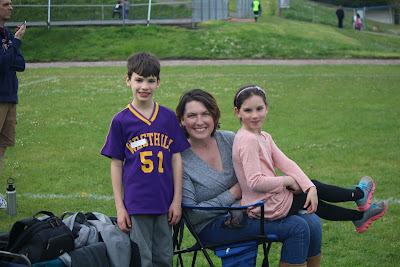 kick ball was a new competition since i last participated 30 years ago.  The green ball at the top of the picture is Easton's attempt.  He earned third place for this event and he didn't even really try his hardest. 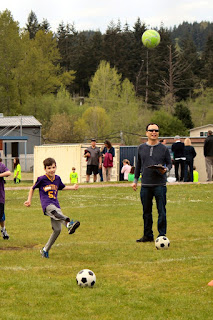 He walked away with a few ribbons that he'll probably keep for the next couple of decades.  I could see the sense of pride in his accomplishments, but I didn't see the passion for track events that I see in his eyes about other things.  We'll keep him running through the remainder of the short season because we make sure when the twins sign up for something that they finish strong and stay with it. 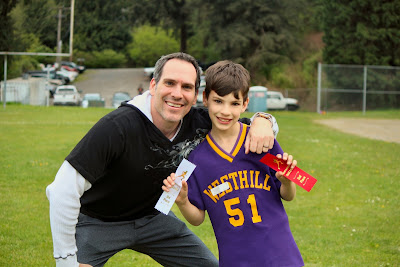 I have a new employee on my team whose family just moved up from Texas.  I wanted the 4 Webbs to give them a warm welcome to the Pacific North West so we took a day trip up North.  We stopped at Roozengaarde where they are tulip crazy. 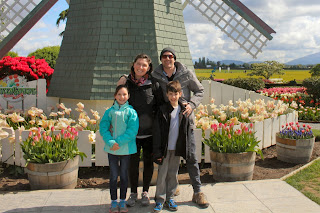 Layla's favorite color was obviously the rows and rows of pink tulips. 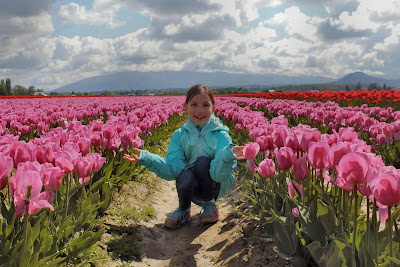 Kendra jumped into the scene because I really wanted to capture the two lovely Webb girls among the colorful field. 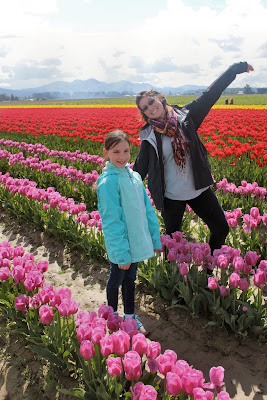 My favorite was the red ones because they are so vibrant and deep in color.  The day was a little chilly, but at least we didn't have to deal with wind or rain.  The fields are a real sight to behold and I was most grateful to walk hand-in-hand with Kendra through them. 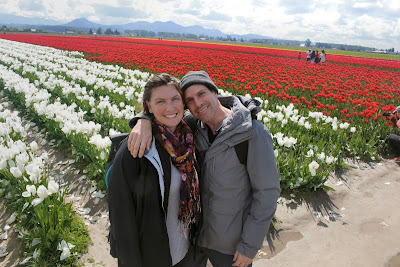 The twins found the tallest dandelions I've ever seen.  The weed field next to the tulips was two feet high and full of these things. 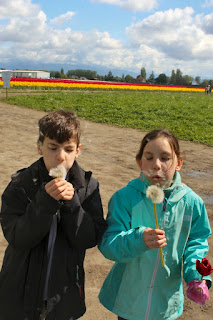 As we walked away from the fields, Layla came up next to me and grabbed my hand.  we smiled at each other and shuffled along the dusty path as she sniffed the tulip that had fallen off the stem. 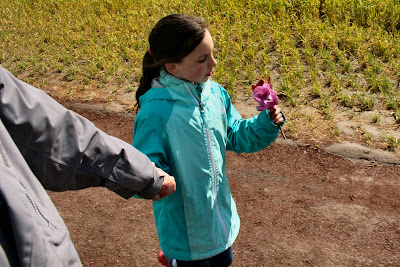 Here's the main sign for the company.  My employee's son hung on tightly to the sign for no apparent reason other than he is 5 years old.   The twins were extremely kind to him, which made me proud. 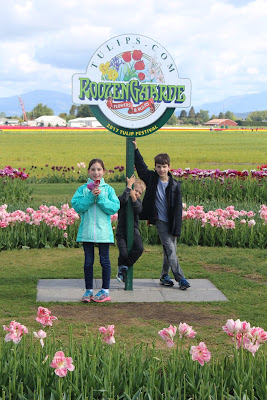 After the flower stop we drove up to Deception Pass State Park where we crossed an amazing bridge and parked.  We walked down from there to the beach area where we played and soaked in the sun, sights, and sounds of the ocean. 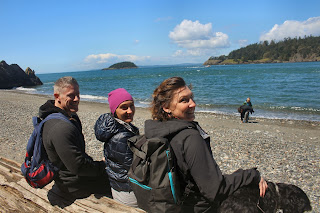 The twins found a hollow log of driftwood that was so huge they climbed inside! 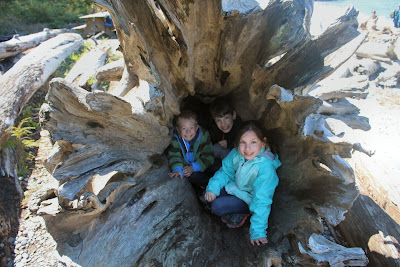 After the beach time we took a hike around goose rock trail.  It was probably around 4 miles climbing to the summit and then down the other side.  The twins found another tree to climb because their eyes are keenly trained to spot any tree worth climbing.  This is such an odd idea considering there are virtually no trees in the whole town of Phoenix big enough to climb. 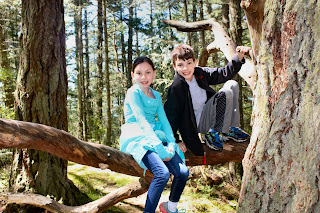 We paused at the top to take in the views of horizon.  Layla laid down on the grass and voluntarily posed for me to take a picture. 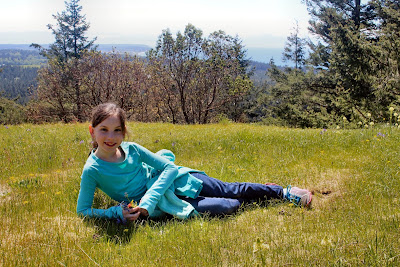 Then I told Kendra and Layla to show me the Sound of Music scene because that's what it felt like on top of the mountain.  Kendra danced around and sang as we smiled along with them. 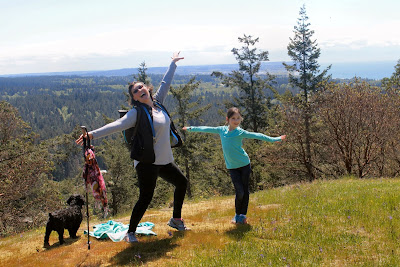 The reality is that Kendra's dealing with sadness in her own time and these moments of joy and happiness are equally as authentic as the sad ones.  Almost eight months ago we left Phoenix.  She is slowly coming around to adjusting to the new realities of life.  It's not all sunshine and rainbows, but I fully appreciate every moment when it is.