Easton and I had the most excellent camping trip weekend.  This is what we "boy time" at the extreme end because it was just the three of us boys being away together alone.  We camped at Larrabee State Park where the campsite was right on the ocean.  Well, it was in the "sound".  According to locals, the ocean is different than the Puget Sound.  Anyway, this is the view we had a few hundred yards away from our site. 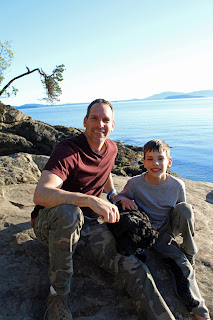 A campfire made it feel authentic.  I got to teach him how to build a proper fire and he'll be amazed by flames for the rest of his life, like I am.  This attempt failed because the wood was too wet, but we were both too tired and ready for bed to bother anymore. 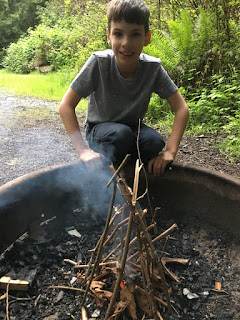 Our campsite was awesome and disastrous.  We were nestled between a main road where cars and motorcycles roared by and a railroad track where the train went by hourly...  all. night. long.  That's the rough part.  The good aspect was the mostly-flat, dry ground and large space for us to spread out our stuff.  I bought a new tent because our old was wore out.  This one is canvas and will probably outlast me in years. 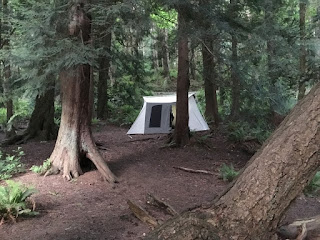 We went to bed fairly early and after a sleepless, cold night I woke up at 5:30am to find this. 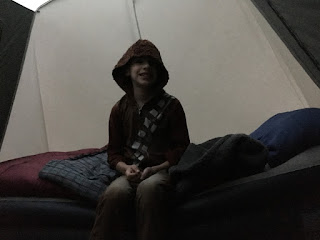 Easton staring at me waiting for me to move a muscle.  I did and he immediately jumped into a sales pitch about how great it would be to see the sunrise over the ocean.  So we did!  Max was bouncing off the walls, I mean bridges.  He was running back and forth so fast that he looks like a blur. We walked through some green forest scenery that looked like the set of a movie. 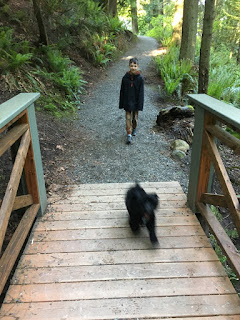 down to the ocean where we were the only people in the entire bay.  Easton used his pocket knife to stab tiny crabs that would crawl out when rocks were turned over.  Max ran free all over the beach and I followed wherever they wanted to go. 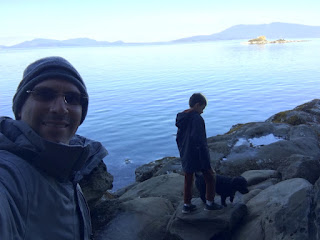 I bought some wood because it's illegal to cut anything down out here.  Easton learned how to chop with a hatchet so that we could get the fire started. 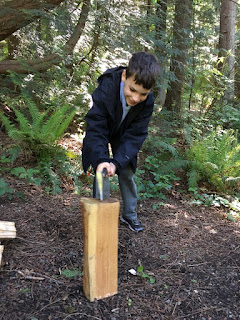 This time it really worked well.  I was impressed with Easton's ability to kick back and relax.  He's an active kind of kid, which is really awesome.  However, it was pleasant to simply "be" without doing anything at all.  We had several thoughtful conversations where I loved every minute.  I want so badly for the twins to be open and honest with us about everything in life, including the good, bad, and the ugly.  That's not always the case from my own personal experience and stories from other kids and adults.  The thing I noticed most about this moment in the picture was how grown up he looks.  it's a little bit of a shock when I realized the little toddler is almost a "pre-teen". 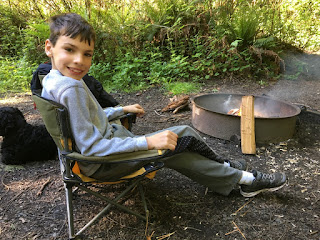 No campout is complete without eating some fire roasted meat products.  Easton's nick name is "hot dog" so this moment had several jokes and laughs. We walked to the beach several times during our two-day trip.  One time was to explore a cave.  Easton and I climbed up this make-shift ladder and found a cave.  We came back with flashlights and muddy clothes so we could check it out. 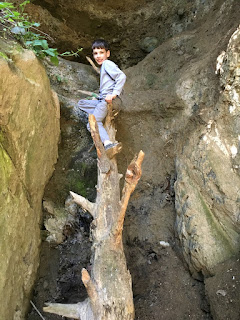 We squeezed our way into the muddy opening.  Easton's responses of amazement were such a joy.  I am proud of his adventurous spirit and curious nature. 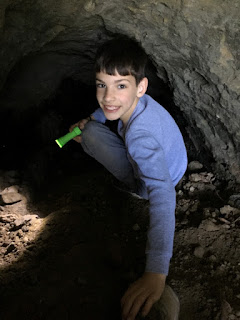 whittling is an essential skill and very enjoyable in the right setting.  Easton felt so empowered to keep his pocket knife with him during the entire trip.  I used my grandpa's knife that was well-worn and sharp as a razor. 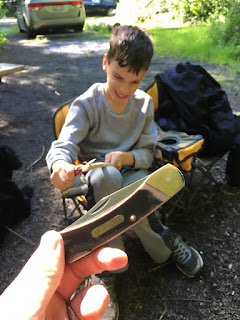 Nobody in the entire campsite had more fun than Max.  He had the time of his life because the wide open spaces and endless wildlife kept him entertained the whole time. 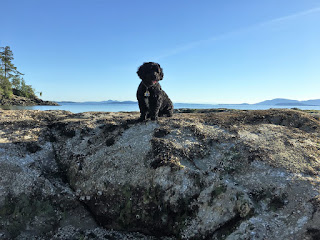 There wasn't much of a museum or history experience here other than the plaque declaring this as the oldest state park in the state of Washington. 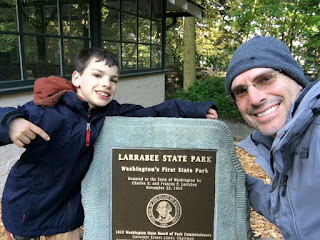 When we arrived home, Max poured out of his seat and onto the driveway pavement.  He didn't move a muscle as we unloaded the smelly, dirty camping mess.  We were all dog tired, including the dog. 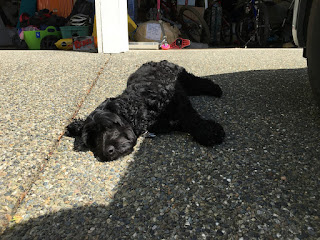 While the boys were freezing our booty off in the woods, Layla had a girl's weekend with Kendra and Alaysha.  Layla's figure skating organization took over 200 skaters to the stars on ice show in Seattle.  Alaysha was kind enough to take Layla and they had an awesome time.  Their early arrival resulted in Layla getting a picture with Gracie Gold who was an Olympic medalist in the 2014 events.  Layla was star struck, but had enough courage to talk to her and ask for a picture. 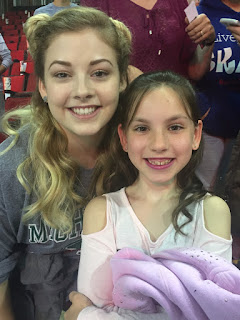 Each weekend seems to bring its own unique adventures even more so here in Seattle.  We are ramping up for summer fun by swapping out our scarfs and hats for shorts and flip-flops.  summer is coming...