The 4 Webbs are sliding into home plate for the school year.  A month from now the twins will wrap up 3rd grade.  They attended 4 classrooms this year:  Tempe, Redmond, home school, and Bothell.  That's a lot of changes in a short amount of time, but I am extremely proud of their flexibility and going with the flow. As we settle into the spring season and exit the wettest winter ever in Seattle, we are discovering more neighborhood community in a few months than we had in 15 years in Phoenix.  Easton declared his new best friend is our next door neighbor.  they hang out every chance they get and sometimes include me in their fun.

Easton invited me to play out a scene from Halo with their Legos.  He still wants to include me in their play time.  that means so much to me. 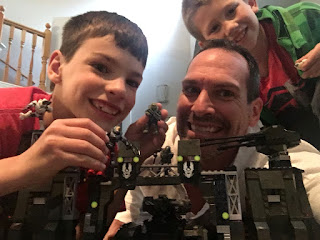 Cain had three blow-up punching gloves which the boys used to chase each other around the street beating each other up.  I gave mine to our other next door neighbor, Tashinga, and took pictures instead of getting hit. 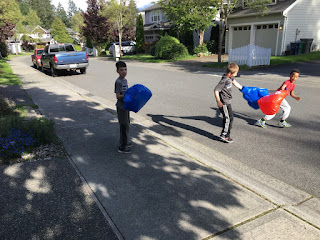 I took the three amigos to the park for a hike down to the lake.  Easton and Cain wanted me to spin them in the tire swing, but Tashinga was not interested in joining.  Nobody puked and there was plenty of laughter.  that's a successful day at the park with three boys. 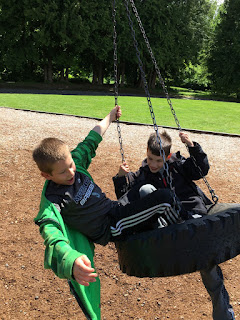 I convinced them to sit still long enough to take a picture.  We hiked down to the lake about 15 minutes from our house where there is plenty of trees and rocks to climb on.  They burned a ton of energy playing in the mud and beach. 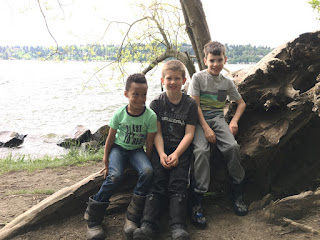 Tashinga is a couple of years younger than Easton so the connection for friendship isn't quite as strong as it is with Cain.  But they all three have fun together and it's good for Easton to include someone younger so he can be a big brother.  Most everyone has a best friend at some point in their life and I'm really happy for Easton to have Cain. 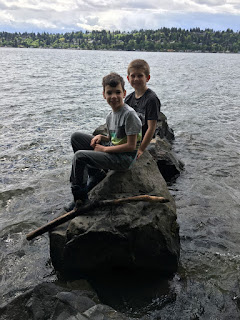 However, nobody replaces the bonds of brother and sister when it comes to the twins. They still spend most of their time at home with each other when their neighbor friends aren't around.  I walked with the twins home from Easton's track meet.  They were picking dandelions along the way and blowing them into the wind.  Layla found a flower she knew Mom would like so she ditched the dandelions and gathered a bouquet for Kendra. 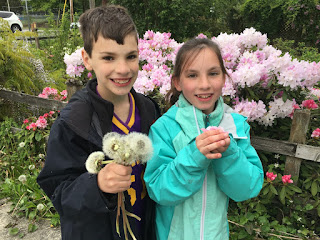 I bribe Easton and I'm not ashamed at all as a parent to employ this technique.  I bought a used copy of Halo 2 from Amazon for $7 because I heard Easton asking about the game.  It arrived in the mail, but I talked with him already about what is required for him to earn it.  I told him to read the book of Mark and John in the Bible and then compare and contrast them in a conversation with the family. He read both books in two evenings and was able to explain the key points and differences.  We were all super impressed, but he set the bar really high now that we know his potential. 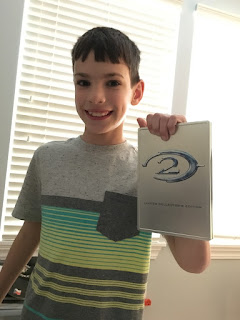 There are all kinds of ways we are developing relationships and reaching out to our neighborhood and city.  Kendra and I went to breakfast for a morning date once the kids were dropped off at school.  during breakfast at the diner she told the waitress she wanted to pay for an elderly couple's breakfast.  We paid for their meal and Kendra went over to sit with them.  She explained that God asked her to do that for them as a way to honor them.

Then, as we left the restaurant Kendra was on the phone with a friend, praying with her about a medical situation with her husband. 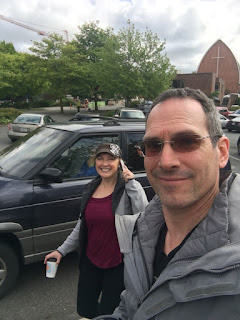 When we arrived home she grabbed some cookies and put them in a bag.  She walked down to a neighbor's house where she prayed with her for healing in her family because they were sick. 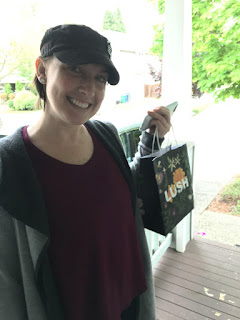 A few months ago I asked a dangerous question:  "What is The Church?"  I've been reshaping what I believe about the answer to that question by using only the Bible to define it.  The camera lens of my heart is coming into clearer focus with answers to what The Church is just by watching Kendra step into the reality of what the Bible describes.  The fruit is coming, but right now we are busy planting seeds.