Even If Nobody Cares

This is a rather awkward post after closing down the blog four months ago.  I pulled a copy of the entire blog to give to the twins.  It's a 1.5 Terabyte PDF file!  I thought it was the end of an eight-year era, but I'm standing around like Rocky Balboa saying, "I still got some stuff left in the tank."

It's been an enjoyable break from the regular cadence of posts every 2-3 days, but after some deep soul searching I want to give this another try and pick up where i left off.  I didn't start this as a business or with expectations of a "following", but somewhere along the line I started to care more about who was reading it than I should have.  It's difficult to perform in front of an empty auditorium and that's what it felt like for the last several months.  I spent hours and hours writing.  I slept less than I should have.  I took time from other hobbies or fun to write, edit, upload, and produce this.  The only people I really knew were reading were my mom, my sister, Kendra's mom, and Aunt Mary.  Somewhere along the way that wasn't enough anymore.  I received a hundred times more likes and comments and conversation starters from people I saw by posting to Facebook.  Nobody said, "I read your blog and..."  It was always, "I saw your post on Facebook and..."

During my time away I realized this blog is mostly about me expressing my feelings and experiences with as much honesty as possible.  There is something very valuable for me to think through and write down what's going on inside my head and my heart.

There's no way for me to catch up on four months of happenings so I'll just pick up this past week and move forward from there.  My priorities have never been more solid:  God in everything, Kendra first, kids second, work third, ministry and leadership fourth.  Nothing else beyond these priorities matter at all because if I'm doing those four properly, there isn't time for anything else.

Here's the summary version of the 4 Webbs over the past few months:

Kendra is wonderfully well!  She's still going to appointments five days a week for blood work, infusions, shots, physical therapy, pilates yoga, and oncologist check-ups.  Her weekly schedule is completely determined by when doctors and appointments can fit her in.  As a result of that my schedule still needs to be flexible and I shift work around to support whatever needs to happen with kids and Kendra.  I'm blessed to have a job that allows for this level of adjustability! 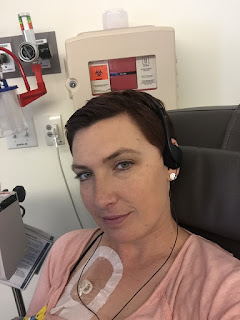 Kendra still has pain in her shoulders from scar tissue resulting from the back brace she wore for months.  The hysterectomy brought on a whole new challenge with hormones.  That plus the radiation and chemotherapy are still causing issues internally, but overall she is fabulously well and healthy.  I used to wake up every morning and ask "how do you feel?" so I could determine the course of my day and what needed to change. Now there are moments in the day when I don't even think about her health and it's amazing to focus on other things completely for a change.  She is well, I am well and that's a great starting point for thinking about the future. 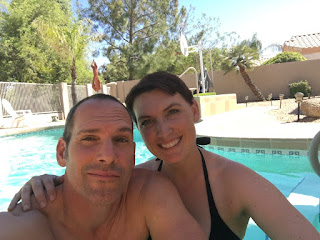 And the biggest proof of her healing is the two-day trip we took to Disneyland with just the two of us.  That's right... we left the kids at home and had a party for two at the happiest place on Earth.  The first day we walked 9.5 miles and she was walking ahead of me, dragging me along most of the time. 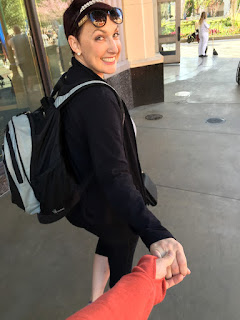 Easton and Layla are 10 days away from being 3rd graders.  I can barely grasp that in my little brain.  They are getting lanky tall and heavy.  I know this because I still carry them to bed each night, but now I have to do it one at a time.  Easton is half-way to earning his black belt in Taekwondo and Layla is still climbing the ranks in figure skating with great success.  This picture is one of the few I capture that shows some candid emotion instead just a fake smile.  They are holding up a book Joanie gave them for their 2nd birthday! 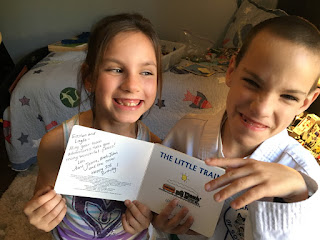 Recently we went camping in Northern AZ and I don't have the time to recount the craziness that happened as we tried to stay dry, but this is one of the few pictures I captured.  The kids had a blast and the parents were stressed out and tired from the wet and cold.  Lessons learned and their fun were worth the trip... barely.  :) 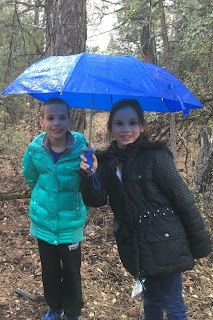 Here is a picture of some of the kids.  We have a new crew of church families we hang out with who are becoming very close and interdependent.  There are some great things happening and the 4 Webbs are right in the middle of it! 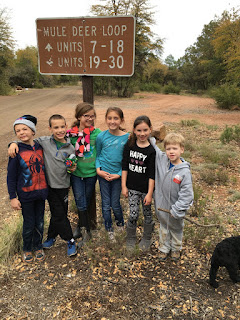 Easton has a shark blanket that is almost ready for summer storage, but we laughed for a long time as he pretended to be eaten. 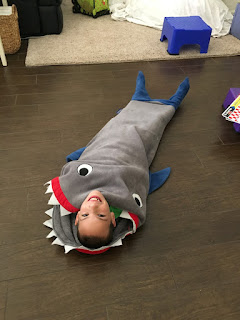 Max is awesome.  He completed his Petco training and is ready for the next step in his journey to be a therapy dog through the AKC training. 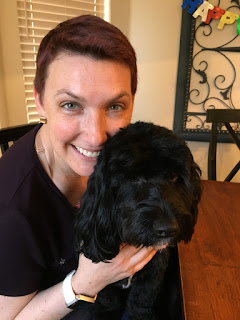 Kendra and I took the kids on individual dates.  Layla went with her and Easton with me.  I gave him an open invite to eat anywhere he wants.  He chose Culvers because they have good burgers and guaranteed ice cream. 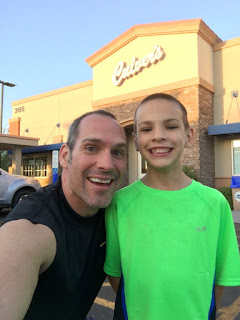 Layla had Cheesecake Factory on her mommy date.  They both dressed up fancy and made some memories. 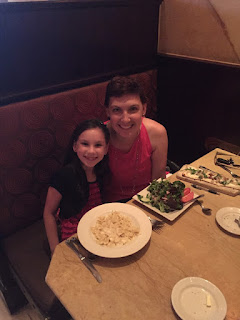 I had some extreme experiences and revelations and Godly encounters over the past few months.  My thought process is shifted in a major way and I'm either very aligned with God's plan or I'm a complete wacko who lost his marbles.  What used to be important is no longer important.  Priorities are adjusting in a way that is counter-cultural, but I don't have any desire to follow the crowd anymore.  Some of the decisions we made lately don't make sense and I don't have time to recount them individually, but just know it is well with my soul and with the 4 Webbs.

This summer will be the most adventurous one ever and I'll start posting again regularly even if nobody cares.  My motivations are different and my passions are still a work in progress.  Welcome back to the 4 Webbs blog!

Thank you Bronson for returning to the the blog! Steve and i LOVE reading it as it helps us stay so connected with the 4 Webbs being so far from us.
Keep it up!