Kendra left me for three days to hang out with her friend, Stephanie, in Malibu.  That provided many opportunities for daddy time.  I took a day off work to spend at the zoo with Easton and Layla as a chaperon.  They've been waiting or months for me to volunteer for a school thing and I chose this to be my act of service for the school.   There's a whole lot of Easton in this post.  The next one will be focused on Layla.  :) 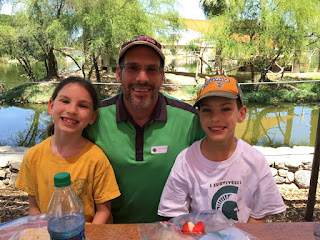 On our way out of the zoo we went through the gift shop as always.  Easton walked directly to this shirt titled, "Poo at the zoo", which shows different shapes of animal droppings.  He held it up and I immediately said, "Nope!"  Didn't stop him from asking though.... 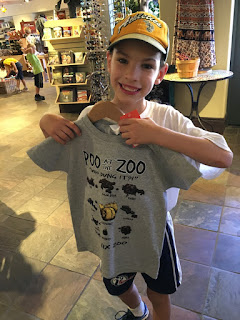 Layla sat with her friend, who was assigned to our "group".  That means I was able to sit with Easton on the bus ride.  Talk about weird!?  I haven't been on a school bus in 35 years or more.  We had an outstanding time together with some memories I know will last a lifetime.  especially for me to ride in a bus... 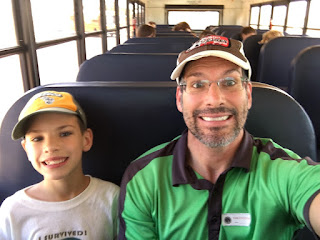 Easton is a green belt in Taekwondo now.  He had his first sparring class where he was hit and kicked as well as hitting and kicking others.  He did super well.  Very controlled and sportsman-like.  He loved every minute of it and I enjoyed watching him put into practice everything he's been learning for the past 10 months or so.  He can't wait to go again this week during the sparring class so that's a good sign.  I'm a bad parent for forgetting to buy him a jock strap.  It was a gamble, but luckily he didn't get kicked in the family jewels. 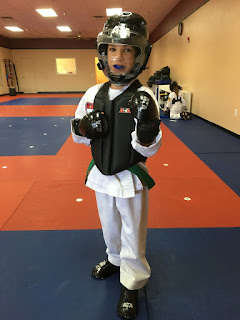 I bought some helium filled balloons for an object lesson and a few cheap laughs.  We took them outside and let them go.  Isaiah 55:8 says, "My thoughts are nothing like your thoughts," says the LORD. "And my ways are far beyond anything you could imagine."  It's difficult to explain to eight year olds what that means, but I did ok with this little illustration.  We watched them for several minutes as the cluster grew smaller and smaller.  I explained how God doesn't think like us and we can never understand the way he thinks.  As high as the balloons traveled up through the atmosphere, that's how vastly different God's thoughts are than our. 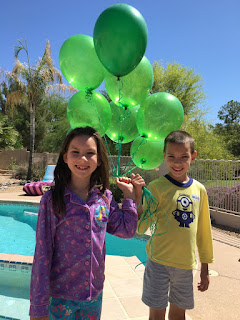 I told the twins, "I need to run to the hardware store for and errand.  please get dressed."  Easton came out with flip flops and a t-shirt.  Layla came out with a princess dress, a bow in her hair, and lots of jewelry.  having boy/girl twins is such a unique experience... 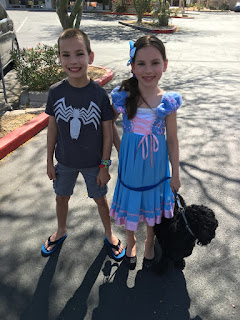 Marisue brought over a watermelon for our church gathering, but it didn't get used.  I cut it into fourths and took the twins down to the green belt for some messy fun.  We dumped watermelon juice everywhere and laughed so hard that Easton was spitting up melon pieces on the ground. I was smart enough not to attempt this feat of a treat inside the house.  With Kendra out of town, I didn't want to create a mess to clean up or to leave for her when she arrived home. 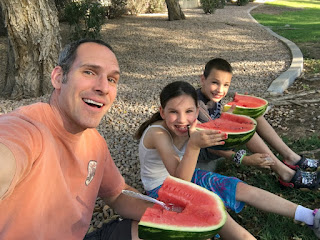 Easton's two extra curricular activities are taekwondo and flag football.  He begged us to sign him up.  His interest is only from his school yard buddies who talk about football and play it during recess.  We've never watched a full NFL game other than the superbowl in Easton's entire life, but that peer pressure and influence sure has power!  He's on a great team with an amazing coach.  I don't know jack squat about football or coaching, but it doesn't take an expert to know a Ferrari when it rolls by.  Easton likes defense the best and although he doesn't have fast-twitch muscles, he gets around rather quickly across the field.  I take him to practice every Wednesday and games every Saturday.  He's a busy dude, but this is a short-term situation for only a few weeks. 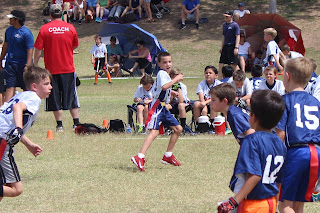 Easton's still into Legos, Star Wars, Jurassic World, the Titanic, and lots of other normal eight-year-old things like Minecraft.  One of my favorite things in the world is watching Easton experience for the first time.