This is a bizzare week where Kendra was in California for a few days watching the Ellen show live.  Then she went to our friend's house for 3 days to watch their kids while our friends went for a couple's getaway.  She had some girl time fun for a few days and then sacrificed a few days for the sake of our friends.  That's all great, but it left a big empty spot for me and the twins.  We miss her greatly, but there is a light at the end of the tunnel and it's not a train.  It's a trip out of town.  Several weeks from now I get to have 3 days with Kendra and without the kids.  I've been looking forward to that time away for weeks already!  Anyway, I get Kendra back tomorrow and will snap out of my funk.

Enough about me, this is about Layla.  She is delightful and lively, to say the least.  This picture is from the zoo trip.  They have their own friends at school, but still choose to hang out together like best friends.  Her hat was a requirement to avoid sunburns.  This one from the Springfield Cardinals is the only one in her room.  Thanks to Papa for the hat! 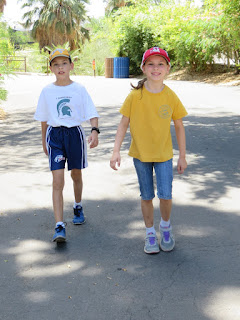 The twins participated in school plays in their classroom.  They memorized lines and did a small performance for the parents.  Easton was the narrator for the Three Billy Goats Gruff.  Layla was Little Red Riding Hood in her play.  She did so well with expressions and acting.  It was a little scary how well she was able to sell it. 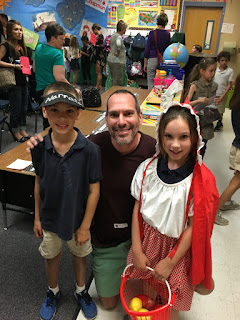 Layla performed in a figure skating show called "Brit Ice Invasion", which included songs from British people and bands.  We initially declined the offer, but Layla's coaches waived the performance fee so she could be in it.  We still had to pay for her costume and some other incidentals, but she was very fortunate to be given such an opportunity.  Here she is at one of the many practice sessions, giving her full attention to the coaches. 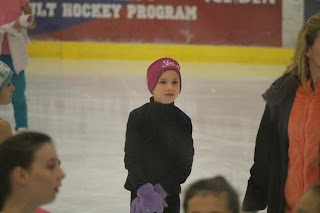 My apologies for the shaky video, but the lights were very dim and the camera had tough time picking up the action.


We were so proud of her for pursing her passions and devoting her time to performing.  She skated in a group for this event.  The show occurred four times in the course of two days.  Her feet and legs were sore because she spent more time on the ice in four days than she normally spends in a whole month!  When she meets people she quickly gets around to the fact that she is a figure skater.  She says, "It's my passion and I love it!"  So much truth in what she says. 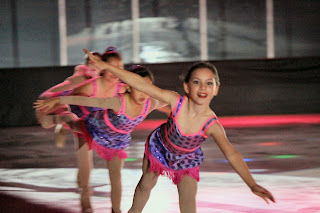 After the last performance Easton and I waited outside for her to see us.  I prepared him with flowers to give her and some guidance about what words of encouragement would be most helpful.  Easton was so kind with being genuinely happy for her. 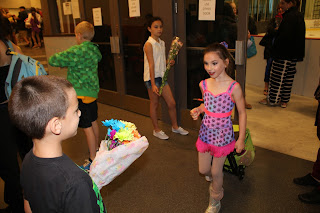 And here's one last picture of our superstar, Layla posing at the photo op area.  She looks way to mature with her stage makeup and outfit.  She's 8 going on 18 and I'm not really ready for this yet. 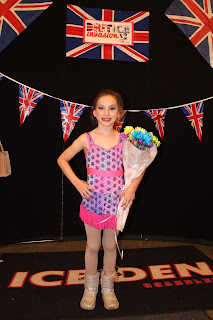 Just like everything else with parenting, no one is ever really ready for the next step.  It's just like grace from God.  Grace is the ability to go through what you couldn't go through the moment before grace was given.  Parenting requires looking at each moment with the grace and skills and love that are available at the time.