The Weight of MInistry

I've been suspiciously absent from social media and the blog for a while now because of the massive amount of change going on for the 4 Webbs.  The short version is that I've resigned as executive pastor at our church and we are ending our involvement with ministry for now.  It's been difficult for the past few months to be juggling so many balls and I came to the conclusion that some things have to change.

Resigning and leaving the church are two of the most difficult choices I've made in a long time.  It's painful.  It's sad.  It's lonely. It's relieving...  So many emotions filled the past 24 hours that I'm exhausted and I still don't have adequate words to describe.  Eight years of serving in various roles. Six years of teaching. Two years as executive pastor.  Two years as ministry leaders.  Hundreds of real relationships and friendships.  It all came to an end in one single meeting.  There are many reasons, but they all fit in the same bucket:  There is a gap between the senior pastor's vision and what I am willing to follow as a member and executive pastor.  He is not right.  He is not wrong.  I am not right.  I am not wrong.  It's just a difference of direction and timing.

I also learned there is a weight to ministry.  It increases little by little over time as influence increases.  I haven't felt over-burdened or burned out at all, but with all that weight being lifted off my shoulders in one moment, I can feel its absence.  I never felt like my responsibilities were too much to handle.  I was never pressured into doing anything either.  Every role and position was a new opportunity to impact people's lives in a greater way.  and now I am in the transition.  I've spent so much time and money and effort on building God's kingdom, but now all of that is done.  I don't regret a single hour or dollar or moment I gave towards ministry.  The only regret is that I didn't contribute more of my resources.  I could have used more of my temporary resources to impact people's eternity.  There is no better way to invest who I am than to pour into the lives of people who are seeking a connection with God.

In the middle of our church transition, Kendra started her 40 days of radiation.  I'm not sure what radiation is like, but I imagine they strap a microwave oven to her mid-section and turn it on high for 60 seconds.  The goal is to kill the cancer cells and we are believing this will be effective.

And just to keep things interesting around our house, Kendra had her consultation about her back surgery and gave the green light for surgery on the 21st, six days from now.  The neurologist said if all goes well that Kendra will be able to throw her back brace away that very same day!

Anyway, enough of the grown up stuff...  there is also a bunch happening in the world of twins.  Easton's Chewbacca pajamas are getting some serious wear even though it is still 100 degrees outside.  The bag he is holding is for his martial arts classes. I found it in Craigslist for a steal and decided to piece his equipment bag together one item at a time.  He was super excited to get it as a reward for earning his two stripes. 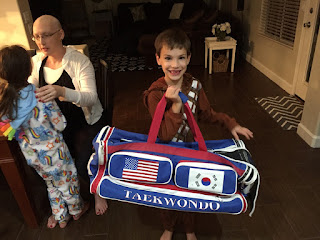 There were a couple of cooler days stuck in the middle of the near-record heat.  I showed them what "carpe diem" means by taking them and their scooters to the skate park. 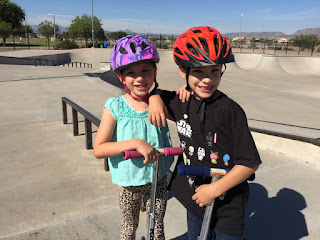 Even though we went in the morning, it was still hot enough on the pavement that the twins sought out the shade and laid on cool concrete during a break time moment. 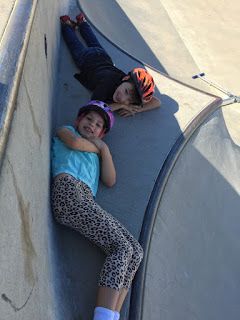 Easton is growing taller so quickly and maturing right before my eyes.  He has a kindness about him that I am very grateful for. 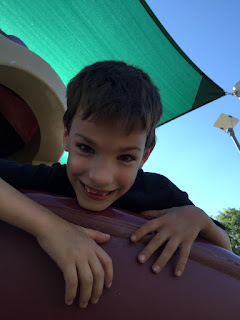 we always find minutes every day and hours every weekend for quality time together.  He went swimming with me for a while because Layla says 80 degrees in the pool is too cold.  No big deal...  We'll just use this opportunity for some boy time! 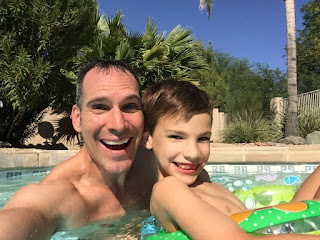 Easton's baby teeth are falling out at a rapid pace.  We went to Hobby Lobby for something and he decided to use his tooth money on a model...  of the Titanic.  His obsession knows no boundaries.  He is so fascinated with the Titanic that he was willing to part ways with his entire spend money container so that he could buy the model.  I thought it was a snap-together version, but when we pulled it out I realized it is glue-together version.  wow, these are small pieces!  It's going to take us a few weeks to tackle this detailed of a model, but he is patient. 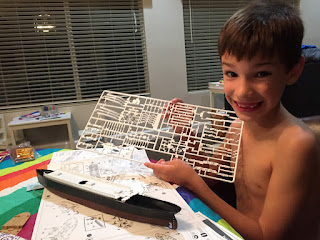 The weather is almost cool enough to hit the hiking trails again.  I convinced them to wait for sunset so it wouldn't be quite so hot.  Their backpacks were loaded with water and some trail mix.  That's all we need for an evening of quality time together!  I'm eagerly awaiting the cooler weather to get on with our outdoor adventures. 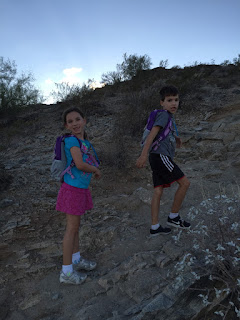