Piggies in the Sun


Someday in the next few months I'll be able to share the details of what's going on in the Webb house, but for now all I can say is that I'm stepping into a level of influence that is absolutely crazy.  madness.  it doesn't make sense and I don't even want to be a part of what I'm about to be involved in, but none the less I'm accepting my role in affecting change.  You could call it reluctant leadership, but in many ways I've been preparing my whole life for what's about to happen.

Anyway, there are much bigger things going on in the world, such as Easton's wiggly tooth that just won't come out.  It's been days now where it flaps in the wind, gets in the way of his eating, and completely grosses me out when he flicks it with his tongue.  He knows there is big $ waiting from the tooth fairy (he knows it's just me) but he also dislikes pain on every level. 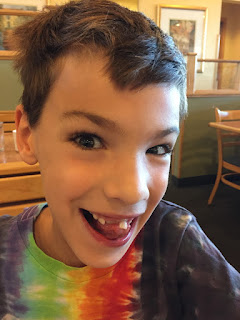 As for Kendra, she got a tattoo and is waiting get cement poured in her back bone and to start microwaving her guts.  The three tiny dots that were tattooed on her hips and belly were required for the radiation equipment to work.  She had a CT scan, which will be used to calibrate the radiation equipment for her 40 days of treatment starting next week.  As for the cement in her back... the consultation with the neurologist is on the 15th and they'll do the procedure on the 21st.  She is eagerly awaiting that so she can be out of her brace.  We had one of our common "doctor dates" where we get to spend time together in the car ride to and from the doctor's visits.  I stood around taking silly pictures while she got her tattoo.  Such a weird day. 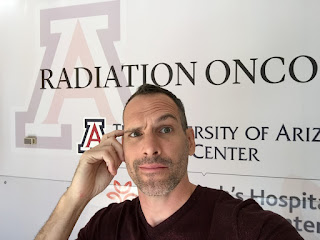 The journey we have been on for seven long months now has been indescribable.  The pain, the stress, the uncertainty, the victories, the moments... It's like I'm living someone else's story from a book or a movie.  Through it all I've been as transparent as possible.  It's not something I do.  It's who I am.  I spent the first three decades of my life keeping secrets.  I hid everything except the happy, shiny details so that my life looks holy and perfect to everyone else. Then I discovered how much more effective it is to relate to people by being genuine and open.  Kendra and I both agreed a long time ago that we want to be attractional by being real.  I am happy to be me, not some false version of me that no one would ever reject.  That's hypocrisy and I've seen it way too much during my life.  We have nothing to lose and everything to gain by just being ourselves.  Here's a morning wake-up picture showing the raw, unfiltered look at what it means to be us. 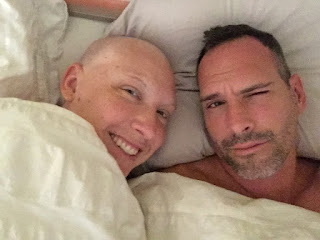 I invite the whole world into our lives.  Not because I want to be famous or important.  I do this because people are interested and they can be encouraged and find hope.  There is no monetary gain or popularity contest to win.  It's honesty, transparency, and vulnerability.  So many people are in bondage to the belief that they can only share the outward cover of perfection.  My heart breaks for those people who can't really be who they are in public or around family or at work or wherever.  Being me isn't a free license to be jerk or rude.  It's freedom to be who I was created to be according to the way God sees me.

This philosophy is also the way we parent.  Easton and Layla are best friends because we pray that and speak that and show that every single day.  I rode bikes with them to the park one sunny afternoon.  They had the whole playground to play in, but chose to play together.  If they didn't play together who would sit on the other side of the teeter totter? 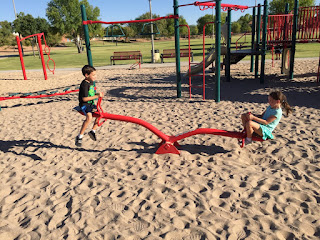 Who would balance out the wobbly, spinning thing? 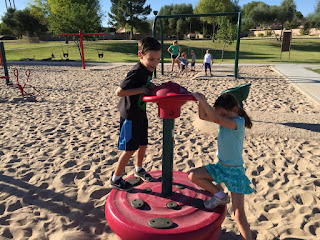 They spend all day long at school in separate classrooms.  That means they are excited to hang out together in the evenings and all weekend long.  We went for Sunday lunch and as we ate, the twins played in the yard outside our window. Easton came over to be silly with his piggie nose on the glass. 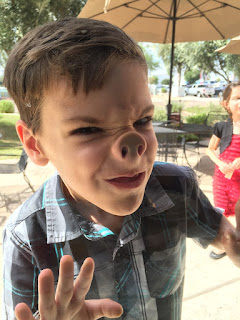 Layla joined in and Easton switched to the smash face look just so he wouldn't be the same as Layla.  We cheered them on and encouraged their creative funny faces.  They are seven years old and I hope they never lose their sense of humor. 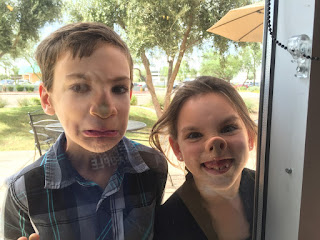 Our ministry classes are doing super.  We are almost half way done with our 8-week class on both church campuses.  The leadership team of 20 is our main focus of attention. They are so awesome and we are grateful for the chance to join with them in leading people into true transformation.

Kendra only has three doctors appointments this week. One vitamin C treatment, one blood work, and one bone building shot for her back.  That's a full week for some people but for Kendra that is a really light week.  She's spending the rest of her free time playing with the twins while they are on fall break.