I am Easton's guidance system.  To go along with my last post about Layla, here is the latest eye-opener for how being a father to a son is playing out for me.  Easton is strongly influenced by those around him.  This is a positive personality characteristic now because I am able to pour into him and see instant results.  Then again...  as he gets older and other people start to influence him that's where I get a little concerned.

He chuckled as he told Kendra and I in the car that he was crossing swords with a friend of his.  We were clueless so inquired further.  He described how he and his friend go to the urinal at the same time and then cross the urine streams as they pee.  We covered our mouths to keep our composure, but we both wanted to bust up laughing.

I got in trouble for the exact same thing in first grade, but I still made a point to express how it is not appropriate to do that and he will get bad consequences if he does it again.  He is so much like me.  Every day is another similarity.  My influence on him is epitomized by the ongoing Teenage Mutant Ninja Turtle saga.  The twins watched a cartoon episode of TMNT on Netflix.  Easton told me the premise of the turtles as though I'd never heard of them.  I played along and then joined in the gleeful description.  His excitement grew to match mine as we discussed.    Easton and Layla sat with me as we watched select portions of the 1990 TMNT movie.  Easton laughed so hard at the part where Leonardo sliced the pizza in the air and one piece landed upside down on Splinter.

Now he IS Leonardo. 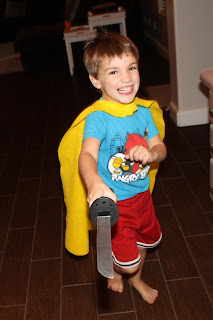 The yellow cape is the closest thing we have to a turtle shell and the wooden sword is what he chose to buy at the Goodwill store with his "Spend" envelope money.  We've been battling it out all over the house since then. 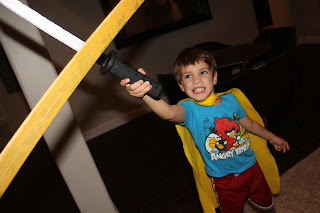 I talked them into "Ninja training" and had them learning Kenpo Karate from P90X.  They believe they really are Ninjas in training.  "...for as he thinks within himself, so he is"! 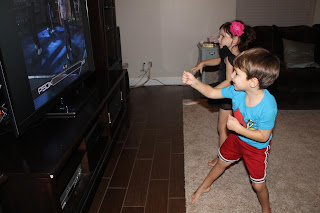 Layla jumped in and played along because Easton and I were having so much fun.  Since there is no girl TMNT she will hence forth be known as Sparkle, the little sister turtle.  This story shows the extent of Easton's intellect and passion.  When he takes a liking to something, he's 100% in.  He not only imitates and copies me, he takes whatever I do to the next level.  Quite a big responsibility and opportunity I have to help build his guidance system of life.  In some ways I see Easton as a rocket and my main job is to point him in the right direction and stabilize his guidance system through his low-Earth orbit.

The 4Webbs are half way through our first month of official allocated spending plan adherence.  We are doing very well, but I'm not having fun.  Saying no is not fun.  Saying no to the twins to save a few bucks is even less fun.  A small part of me wants things to go back to the way they were when Kendra didn't have exact targets of what to spend when and where, but I know that's not possible.  We're attending Financial Peace University and made it through 6 of the 10 weekly classes.  I'm very proud of Kendra for taking the bull by the horns regarding our finances.  For the first time in our marriage we are intentionally paddling our financial boat in the same direction.

Part of our sacrifices this month is due to choosing (together) to get another yearly membership to the zoo.  The kids love it and I'm certain we will get our money's worth out of it based on the number of expected visits.  Let's get this outdoor season of the year started already! 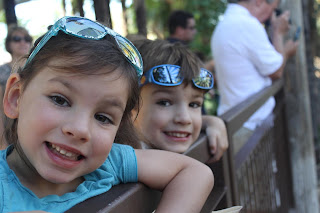 Easton is still very interested in owls.  The twins were able to get up close and personal with a few spectacled owls. I've been hearing owl sounds around our house continuously since then.  At least he hasn't taken up flute lessons yet.

The temps are cool enough to enjoy animal watching, but warm enough to still play in the splash pad.  They are making the most of this season. 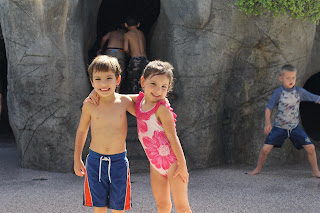 Kendra's new financial mindset is evident in her choice of how to decorate our house for Halloween and fall. She could spend $500 on Pottery Barn decorations, or she could spend $100 on Target decorations.  OR she could spend $0 and use the construction paper and markers we have around the house.  Good choice and way more educational! 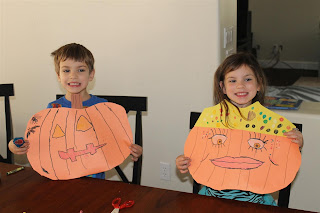 The ducks who starved all summer due to lack of park patrons are probably stuffed beyond belief now that life is flowing back through the city.  Layla is getting brave on the monkey bars.  maybe a little too brave?  I'm so protective of her and want to keep her from hospital visits and pain as much as possible. 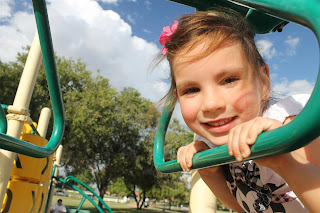 Easton spends his duck  park time wandering through the tunnels and playing TMNT.  What a happy boy we have. 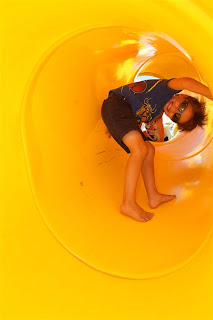 He hasn't lost his love of Spiderman yet (as you can see by his choice of shirts).  He knows he'll be Spiderman for Halloween this year, but he doesn't know Daddy is getting an adult-sized Spiderman costume (for free) to join him in his crime fighting adventures.  I can't wait to see his face when he sees us dressed up together as Spiderman together.

An entire playground and 3 acre park is waiting for the twins to explore.  Yet, they are within two feet of each other as they scamper around the jungle gym.  Nothing wrong with best friends doing what best friends do best. 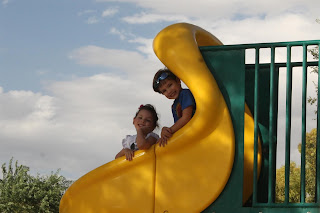 And to prove my point even further, they are sharing a pretend duck ride to nowhere and enjoying every second of it.  They look alike, but it's clear Layla is a mini-Kendra and Easton is a mini-me.  People comment regularly about how closely tied their looks are to ours.  I cannot deny they truly are my own! 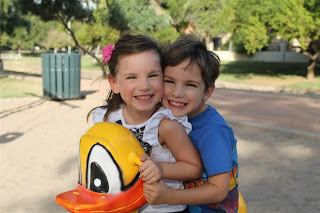