After a week at Disney World we met up with Ouma and Oupa to board the Disney Fantasy cruise ship for a week at sea.  We waited in line for everything during our week at Disney World and then continued the waiting, starting with going through the cattle herding process to get 4,000 people through a single entrance on the side of the ship.

Just being with Ouma and Oupa made the wait time more tolerable.  We had an entire week's worth of adventures to share with them. 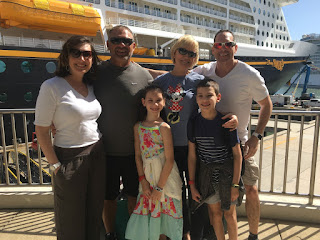 We ate for seven days straight.  Every meal was all-you-can-eat and we took full advantage of the verity including my bravery to eat snails.  mmmm... tasty.  nobody else tried one! 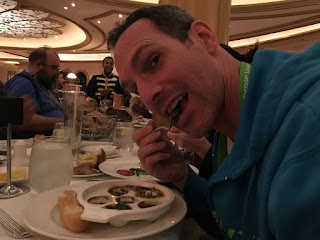 The twins happily joined the kids club called the "Oceaneer Club".  the ages were 3-12 so there was plenty to see and do for the twins since they are 10.  During one of the labs they made a small bucket of slime.  the instructors had the kids put their hands on their heads so they could add ingredients without the kids messing around with the contents.  Their time in this area ended as soon as they found out they could be let int "Edge", the kids club for 11-14 year olds.  I signed a waiver and they spent the next six days making friends, running around the ship (with a purpose) and playing video games on the massive entertainment centers. 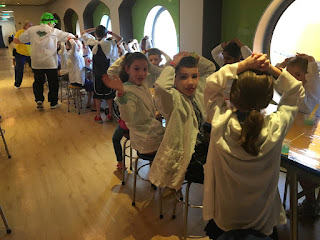 Easton said his favorite part of the cruise was free, unlimited ice cream all day and night.  We ate ice cream at least three times a day, no joke. The tube behind us is the AquaDuck.  All of us rode the raft at least once around the ship's deck. 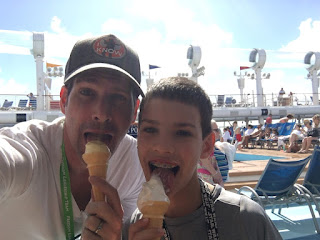 Activities were available around the clock.  I'm not sure what parents allow their kids to be playing games at 1:00am, but there were things to do for all ages at almost all hours.  We were all wiped out each day so our normal 8:30 bedtime was fairly consistent for all 4 Webbs.  Layla joined a dance performance class where they learned a dance and performed it for the crowd of parents. 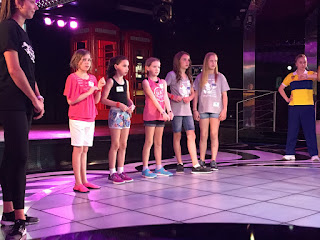 Layla was front and center as always with her exuberance and skill.  We all watched and cheered as they choreographed the short routine. 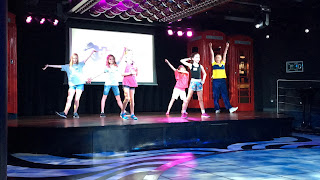 Us adults spent many hours doing this.  sitting, resting, and talking.  The twins have no way to process why we would do this.  Lucky for us, Disney provides a variety of ways for kids to do what they want while we do what we want. 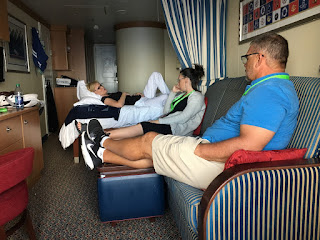 On the rare occasions when the twins would have to wait on us for something, at least they had some incredible views to pass the time.  This is Ouma's window in their room.  It's a huge round portal with a padded seat to cradle into like Easton is doing.  There was nothing but water in every direction.  That feeling was surprisingly comforting without any fear. 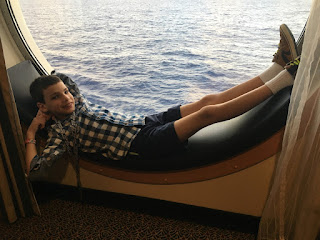 We dressed up twice for fancy dinners.  Our luggage only had room for a limited number of outfits since we were gone for two weeks.  The days were warm, but the evenings were breezy and slightly chilly so jackets were prepared and used.  Layla and Kendra looked especially lovely in their dinner outfits. 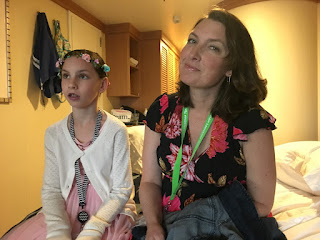 The Animator's Palate was our favorite dinner place because of the technology built into the experience.  The ambiance was Disney through and through with the amount of detail expected from them.  Ouma had plenty of hugs and loving time when the twins were in our presence.  Her lap is available even during dinner time as we wait between courses.  Dessert was included in every single meal and that habit was hard to break after seven day's worth of expecting exquisite desserts. 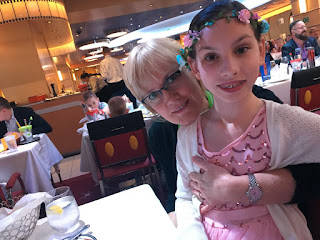 Oupa was so involved during the week that I hoped he had enough decompress time to hang out and relax.  I'm so happy it worked out for us to take the cruise together.  The difference in skin tone is dramatic in this picture.  It shows the kids with their Seattle winter white and Oupa with his daily outdoor California tan.  Definitely related though! 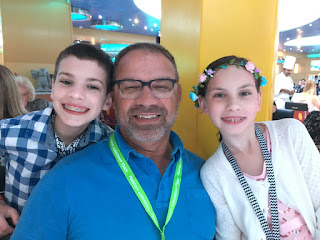 Only a few pics exist of Kendra and I together during the cruise because it was rare for us to be together, with a camera, with someone else around to take our picture.  come to think of it, that is the exact reason there are very few pictures of us for the past 15 years.  More so on the cruise though because we were in our bathing suits with our phones in our room. 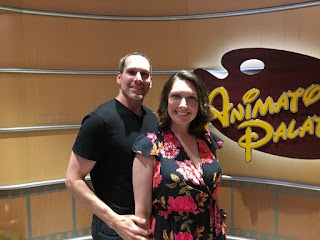 Ouma and Oupa and Kendra and I had a super exquisite dinner at Palo without the twins.  It was about as fancy of a dinner as I've ever experienced with a view of the vast ocean.  It will be really tough to top that in the future. 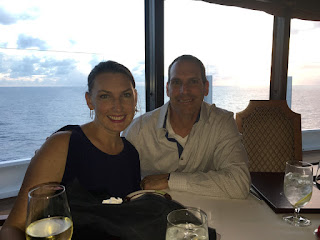 We arrived at St. Maarten to see a destroyed island that looked nothing like I expected.  Oupa and Easton joined me on a scouting mission to check it out.  A few ships were docked at the well maintained port, but every step away from the ship felt more and more third-world. 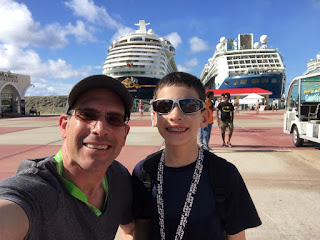 The row of businesses making up the small downtown area were 80% jewelry stores.  Never seen that many jewely stores in one place.  Oupa was a trooper to walk the length of the streets back and forth so we could check it all out.  The water wasn't as clear or blue as I expected, but there was a beach right off the dock. 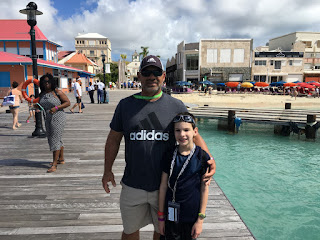 The ladies joined us for an excursion to another beach about 30 minutes away.  We sat patiently on the bus as the driver calmly squeaked through super tight spots where roads and cars were scary narrow.  Easton found a cantaloupe-sized Conch shell and Layla found handfuls of sparkly shells.  The resort we went to was not special.  The pool was tiny and uninviting, but sand on the beach was almost worth taking our whole afternoon.  I was so happy to be in the ocean floating with Kendra.  That was one of the main goals of our vacation because we both love the beach and ocean so deeply. 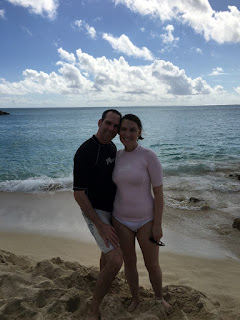 Our room service attendant was so great at leaving chocolates, a nicely cleaned room, and even a monkey towel.  Easton dressed perfectly for the pirates day as we all did, but unfortunately no pictures were taken of all of us mateys together. 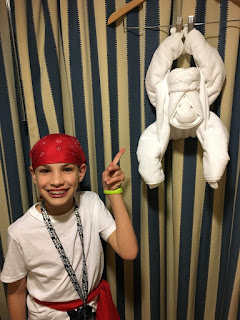 We arrived at St. Thomas to see an amazingly different scene than St. Maarten.  This island is US owned instead of French/Netherland owned.  The buildings held together much better and it was remodeled much faster.  The rainbow and sailing ships made for a picture perfect view of the welcomed sight. 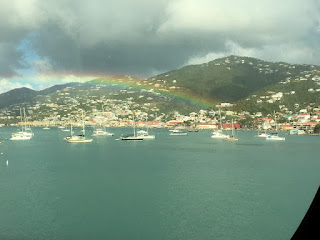 Kendra and Ouma stayed on board while the four of us went exploring.  The gondola ride cost about $60 for the four of us and it was the only thing we did here because we didn't want to spend the entire time off the ship during the three days at port.  The scene was great, but not much was open at the top.  A few shops and a restaurant were all that operates right now.  I heard there is a petting zoo and path to hike, but none of it was open. 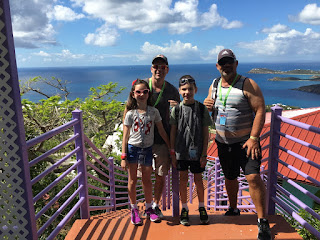 We celebrated Easton and Layla's birthday this evening.  The fruity drinks and extra special dessert made the night memorable.  We told them how incredibly fortunate they are to have a two week Disney vacation as their birthday gift.  I don't expect we'll ever top this one. 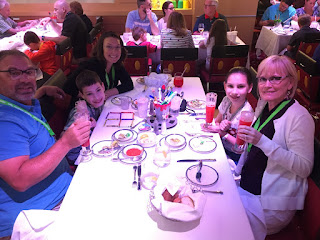 Kendra read how people decorate the metal door to the room.  She was right because it was common to see magnets all over people's doors.  Here is our personalized design Kendra had made for us. 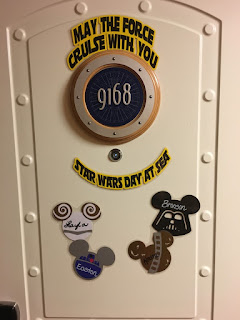 The Star Wars day at see was a blast.  The bed cover was even Star Wars themed.  We saw characters all over the ship and even had a run-in with a couple of storm troopers. 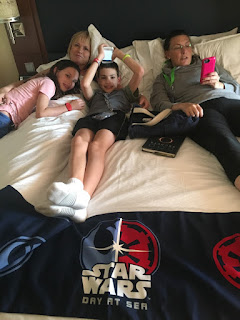 The last day was my favorite of the entire trip.  Castaway Cay was everything I hoped for in a Disney owned island.  Lots of umbrellas and chairs stuck in the well-managed fine sand beach.  The food was average, but that's not why people go here. 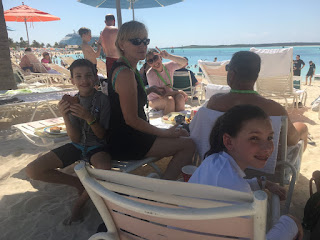 Easton found some kids digging a hole.  He spent an hour or so packing sand against the walls and getting messy.  I was happy for him to go play with a group of strange kids while Layla snorkeled around the bay with her friends from the ship. 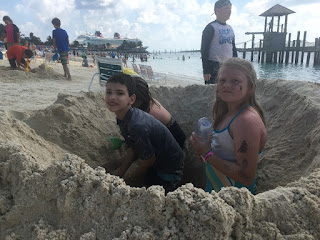 All of us snorkeled and saw many creatures of the sea.  We brought full-face snorkel masks, which was an awesome plan.  We rented fins and life vests for a few bucks.  Easton and Layla and I went out together.  We saw a group of people gathered in an area so we went to check it out.  A massive sea turtle swam right under us!  It surfaced for air within a few feet of us and we touched it's back.  Later we learned we weren't supposed to do that, but it was coming right up by us.  The four adults also swam out together.  We saw some huge fish and some of the sunken secrets Disney placed out there.  I choose this picture as our official Disney Cruise picture because it represents many of the reasons we went there. 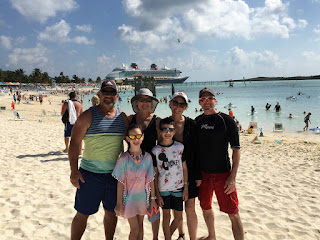 Kendra bought these matching Star Wars hats at Disney World, but I finally got a picture of us together as we drove away from our beach day at Castaway Cay.  Her hat says, "I love you" and my hat says, "I know". 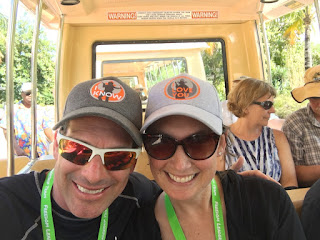 We all had hopes of playing many card games on the cruise, but we were all so busy and having fun that we didn't have many occasions where we were all together and not doing anything.  On this rare occasion we played Spades by the pool.  Competition is fierce with this crew and none of us adults showed any mercy for each other or the kids when it came to playing. 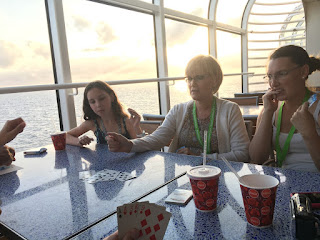 Each cabin has the same waiters and waitreses for the whole week.  Ours were so delightful and top-notch.  The kids regularly finished their meal earlier than the adults.  They would leave and go play at the Edge with their friends leaving us to casually enjoy the two-hour meal time every night. 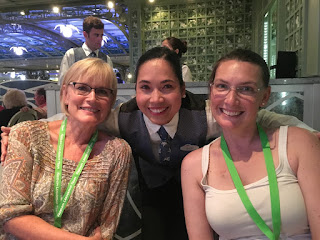 They regularly made origami gifts and played riddle games with crayons on the table. 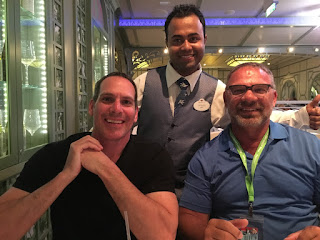 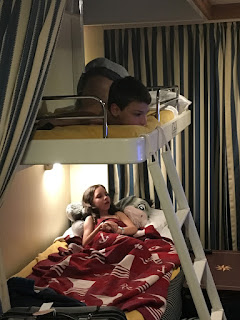 This was our first cruise experience ever and it was the most awesome way to take one.  The weather was amazing.  The ocean was relatively calm, and the ship was clean and well maintained.  That being said, we will probably never go on a cruise again.  It took three days after the cruise for us to stop losing our balance and feeling a little off.  No one got sea sick on the cruise or after, but that weird feeling of being tossed back and forth, no matter how slightly, made for a maddening week and days after.  Our ideal vacation would include being in one spot, in a house, on a beach.  that way we can see the surrounding town on our own timeline and be on the beach any time we want.  The twins loved everything about the cruise and they would go on one again tomorrow if they had the opportunity.  What an experience of a lifetime for the 4 Webbs!