On a not-so-sunny day we went to the ocean for a trip with Ouma and Oupa.  The twins love to explore for bugs and whatever else is in the water like these tiny crabs.  They learned the hard way that even the small ones have strong pinchers.  Learning how to hold one by the back is an essential skill they couldn't possibly learn in AZ so they are figuring it out now. 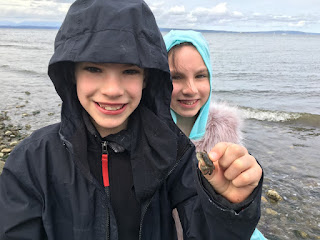 Miles of shoreline leads to slow walks as they attempt to turn over every rock on the edge where ocean bugs live.  Their rain / mud boots have seen so much action that we'll need to throw them out after this rainy season is over. 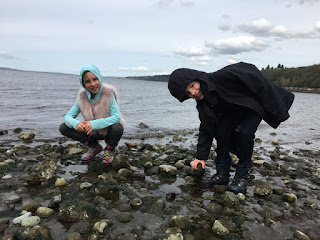 Easton found this trout slide and climbed all over it.  He laughed several times about how the slide ends at the butt-end of the fish.  Those jokes never get old for a nine-year-old. 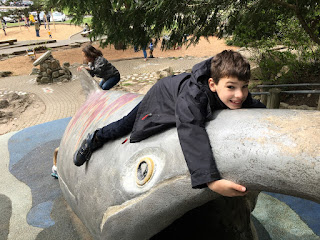 All of us took a hike through the forest trails.  There were some aches and pains for us old people as a result, but the fresh air and exercise was exhilarating.  It's chilly, but if the alternative is being stuck inside, then it makes the decision a little easier to go brave the elements.  Our family hikes include exploration, laughing, and a few aches from sore muscles. 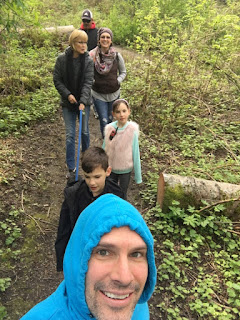 We took a day trip to Whidbey island for one of the most scenic hikes I've ever seen.  The ferry ride there is a short 15-20 minutes.  Barely enough time for the kids to roam around the decks and not even close to enough time for Oupa and Doyle to have a full conversation. 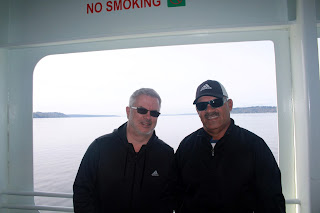 Evelyn came with us and became a good travel partner with Layla. 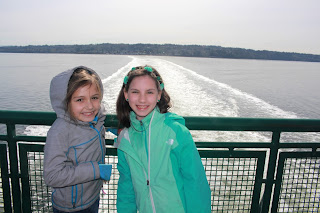 Evelyn fit in with Easton well also.  They get along famously, which made for a pleasant journey as we trekked 5+ miles along the shore of Ebey Trail. 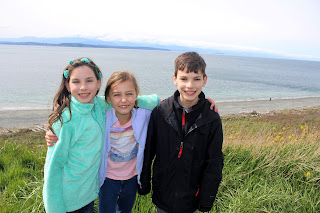 I made everyone stop frequently for pictures and they obliged.  This is probably my favorite because it shows the whole crew in one picture along with a small view of the scenic ocean and sky line. 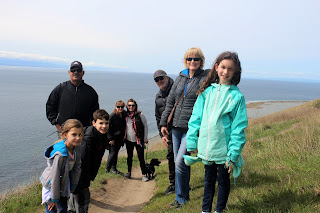 Ouma and Oupa cuddled as we paused because the wind was a little chilly.  I like Easton and Layla seeing this type of love expression because I want them to know what it looks like to be affectionate with a spouse no matter how many years of marriage are under their belt. 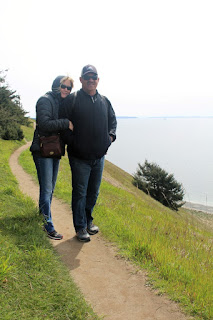 Kendra's back pain comes and goes, but on this day she braved the pain and hiked with us in spite of it.  Having her go with us on a 5-mile hike seems very normal already, but I will never lose the gratitude and amazement about how incredibly miraculous it is to have her be so physically stabile to do these types of activities. 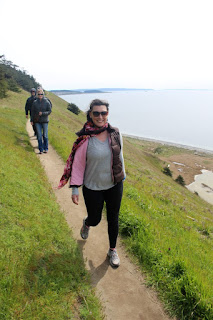 I set up the camera on a timer so I could join the group in a picture of all of us.  It would be difficult even with a panorama shot to capture the horizon and height of our trail.  Easton and Layla spent most of the hike looking down at the ground for roly-poly bugs.  I kept telling them to look up at the breath-taking scene straight out of movie, but they were indifferent about it.  Maybe this is the first sign of being a native Seattle-ite... 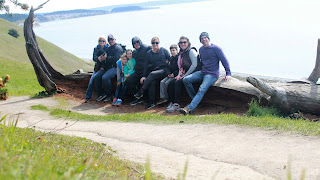 The 4 Webbs are having adventures like we never could have imagined a year ago.  So much has changed about every detail of life.  From something as basic as where we take our dry cleaning to big things like taking a day trip to an island. 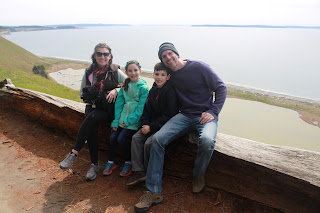 Max made the transition better than any of us.  He is truly content no matter what state he is in.  He had a particularly fun time on this trip because we let him roam free, even along the edge of a massive cliff.  two inches behind his tail is a massive slope down to certain death, but we've grown comfortable knowing Max is not an idiot.  He may look like an idiot, but he's the sweetest, smartest, most obedient dog I've own. 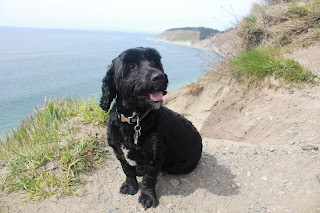 When we hiked down to the shoreline the kids were all about running from the waves.  They were big at all, but plenty big enough to have some suspense of racing away from the waves as they come crashing up the beach. 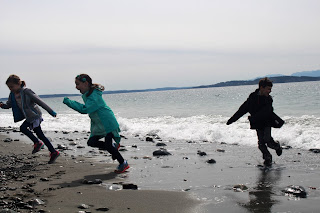 This picture of Kendra is the best one i've taken of her in months.  She loves the ocean more than I knew and I'm glad we are a short drive away from it. 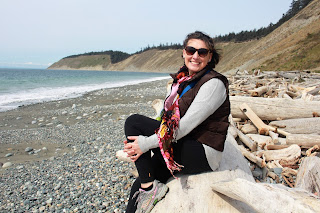 Easton and Layla appease me sometimes by staging pictures.  They are best friends who happily walk along the beach pointing things out to each other.  They both have a passion for the Earth and life in all forms.  The science and math interests are strong for both of them even if they don't want to admit it for some reason. 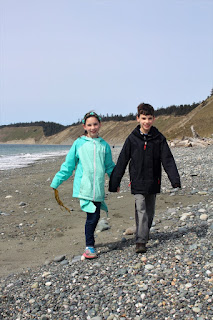 The two of us walking together on the beach seems more like a fake dating profile than a reality.  I could have held her hand and walked on the sand for hours without growing tired of it.  We took another picture of us kissing, but it didn't turn out well.  We were genuinely kissing like lovers do, but for some reason that didn't come across in the picture.  this one will have to do. 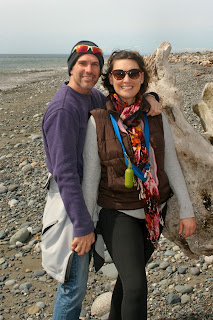 Layla and Evelyn were walking and talking in the exact same manner as their grandmothers behind them.  I turned around and smiled from the humor of the scene. 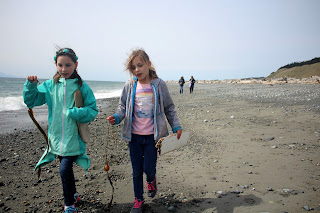 We stopped at a pie place on the way home to taste the local flavors.  Easton saw a tractor under an awening and jumped up in the seat.  He's always had a love of wheels; Even ones attached to an immobile tractor. 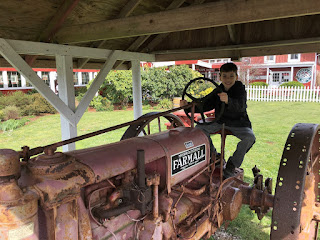 Part of the enjoyment during our trip was having time with Easton while Layla was destracted by Evelyn.  He still calls me over to show me things like the seagulls floating as we pass by on the ferry and the splashing of the water as our boat moves through the water.  I am super excited about going on a Disney cruise as a family.  I am certain Easton will have the time of his life aboard the massive ship.  In 10 months we'll be on taking a cruise for the first time ever.  That's enough of a carrot on a stick to keep me motivated. 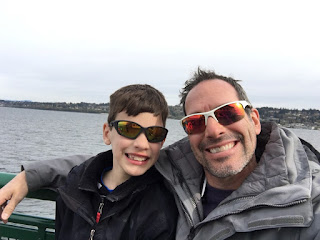