Today is just another Monday.  There were months in 2015 when I dreamed of a plain old Monday where I go to work and Kendra stays home and the kids go to school.  I won't suggest we are back to the same ole' same ole', but there is so much peacefulness in getting back to basics and back to simplicity.  Kendra is experiencing some pain still in her back and hips, but it's nothing compared to what she went through last year.  Layla and Easton are not liking school because their classmates are not being kind to them, but i'm glad for them to be on the other side of the "new kid" equation and understand how they can respond to new kids once they get established next year.  My job is roughly twice as time consuming as my last job and i'm in over my head technically, but i'm grateful for every meeting and decision and success.

My 12 year old car with 110,000 miles ( the one I brag about how awesome it is) cost me $3,500 in repairs in the past week.  sure beats having a car payment, but I'm really starting to question the financial smarts of keeping it another 5 years while we pay off the van.  This is the kind of stuff that my dad/husband brain thinks about in my idle time.  Hoping for a smooth winter with no car problems... 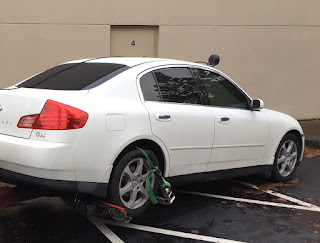 Kendra's hair is in that in-between stage where it's not short enough to just wash and go, but it's not long enough to put in a pony tail.  So Layla brushes her hair and keeps her from cutting it off when she gets frustrated about it. 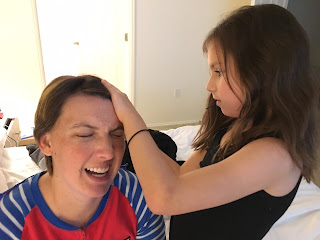 When Ouma cleans, she uses the special gloves.  When Layla cleans, which is a new thing around our house, she also uses the same gloves.  She said, "wow, it's not so disgusting to touch yucky food with these on". 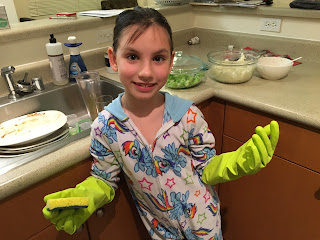 Layla is back on the ice.  She has a new coach, new rink, and new routines.  Now it's time to get her some new skates too since she grew out of her old ones.  I am thankful for a flexible work schedule here similar to what i had at my old job where i can be an active part of the kid's world in the afternoons. 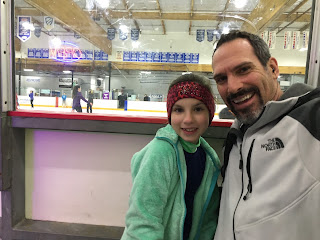 See that white stuff on the mountains?  yeah, so...  we're gonna get some snow.  but if we don't then we'll be going up to it this winter. 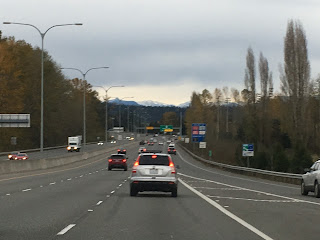 Easton needed the cub scout gear in order to jump in with the program.  we went to the boy scout Mecca in Seattle where they have every badge and book and piece of gear you could think of.  He'll be ready to join in at the first of the year when the holidays are over. 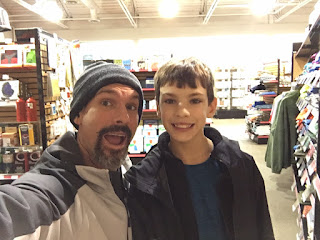 I told him to look scared for this next picture of the bigfoot holding him in a headlock, but he doesn't even have a scared look that I know of.  He's a little too serious sometimes for a third grader, but whatever he puts his mind to, he can accomplish so i'm expecting him to jump in with both feet as a scout. 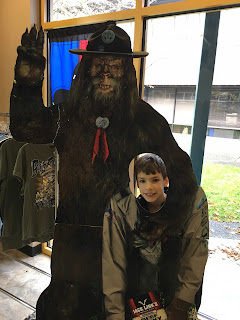 The other big news for the Webbs is that our house loan is approved, appraised, completed, and almost closed.  we close officially on December 7th and move in on the 16th!  We are all tired of living out of a suitcase and ready to really settle into our new life in Seattle
Posted by The Four Webbs at 5:37 PM