We wrapped up on of the greatest vacation weeks ever for our family.  What made it great was not an exotic location or entertaining shows or expensive outings.  The fun and relaxation was experienced was relational and simple.  Aunt Mary and Uncle Joel have a 9-acre country version of Disneyland.  There were days I didn't even leave the property and that was the goal.  Kendra was in her pajamas more than not.  That's a perfectly valid option even with family coming over.

Stephanie is Joel's daughter who I talked to about Kendra's cancer diagnosis and prognosis.  She worked for one of the leading cancer docs in Chicago at the time and was able to give us a reliable third opinion.  My brother-in-law John and Kendra's oncologist rounded out the team of opinions.  Anyway, it was a special occasion for me to see Kendra with Stephanie because of the emotional ties I developed during the last several months as I talked openly with her about Kendra.  This picture represents Kendra as the miracle and Stephanie as the witness of the doctor's reports. 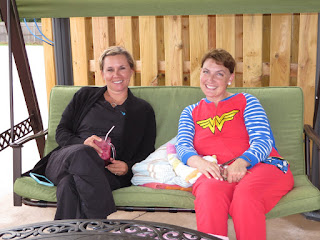 Mary threw a "reveal" party to share her new house and upgrades with friends and family.  My aunt Gay's family came to share in the festivities.  I don't get to see them often so their presence, and many other long-lost friends of my parents, made it a memorable day. 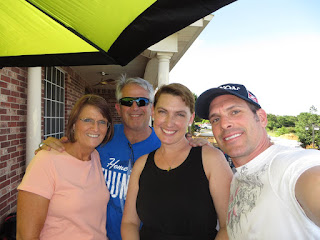 I took the twins with Mary and I to visit the cemetery.  I know that's not a normal kind of vacation destination, but it was very valuable to honor my grandpa, uncles, and relatives.  This is a picture from this trip. 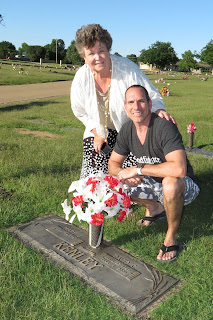 and here is a picture from when we buried Uncle Dave eight years ago.  My, how times change and how much older I look in just eight short years. 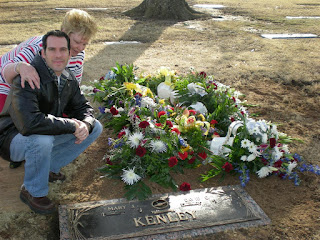 Easton and Layla got a good understanding of what a cemetery is and who is there and why.  They watched as Mary and I talked about the deceased with honor and appreciation.  I trust they will do the same when they get older too. 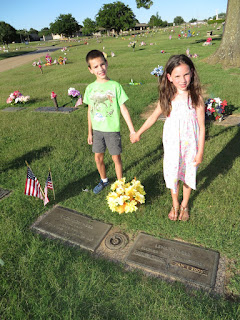 Here's a picture of the last time they were here when they were four years old: 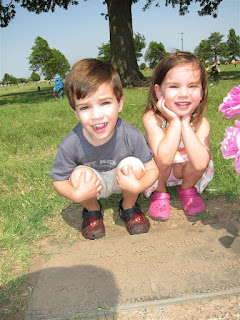 The rest of the trip included more traditional vacation experiences like shooting rifles.  Layla had her first rifle shooting lesson.  The closest she's come to shooting a 22 until now was shooting a semi-auto airsoft pistol in our back yard.  Joel set up some targets and Layla nailed the bulls eye within a few hairs. 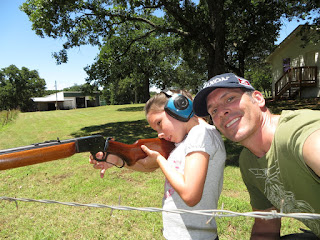 I am proud of her for learning gun safety and how to shoot.  If there is ever a time where she will need to use a gun at least she has a little practical experience to draw from. 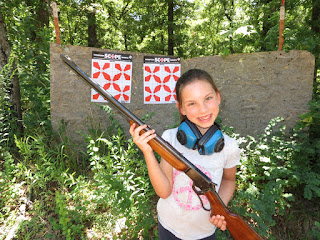 Easton was disappointed because Layla's shot was better than his, but I didn't care about that one bit.  I'm not sure why he does either.  He's not super competitive but Layla tends to push him in that direction more than he likes.  I was proud of him for holding it strong, loading the bullets, and hitting the target. 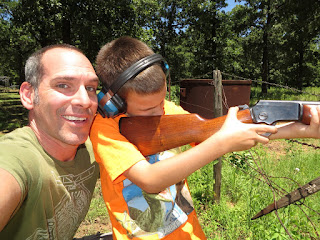 Joel's farm property includes ponds, woods, and a rope swing.  The three of us took turns flailing around like chickens with our heads cut off.  Layla was obviously the most graceful. 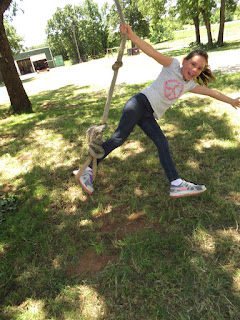 The one thing I didn't get during our OKC trip was a picture with Mary.  Not sure why other than she was preparing for the party, partying, or recovering from the party most of the time we were there.  Joel was more than happy to lead the adventures and I'm grateful for them having such a Godly man in their life who knows how to "uncle" well. 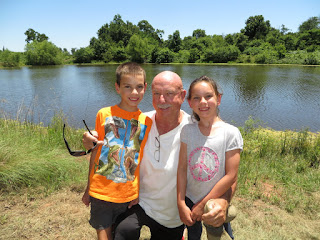 Not many pictures of me because I was busy taking them, as I have for the past eight years of their lives.  On the rare occasion when there is someone else with us who agrees to take pictures, I take full advantage.  This is my favorite picture with the twins from the week-long vacation. 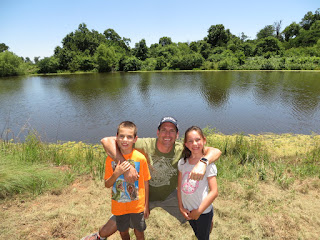 While we prepared for fishing I explained how it is possible to catch fish by putting a grasshopper on a hook instead of a worm.  this blew their minds and we began searching for grasshoppers to prove it.  Layla found this little guy clinging to a weed. I plucked the weed and they talked and touched and looked at the grasshopper.  They've seen grasshoppers in "Bugs Life" and on TV shows.  they've read about them in books.  I've described them in great detail before.  However, nothing compares to actually experiencing a real, live grasshopper.  Insert a spiritual metaphor here and you'll get an idea of where I am in my own journey. 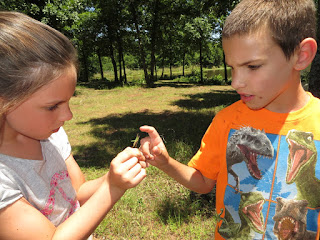 John is Joel's handy man.  He took time from his tractor duties to help Easton cast the line and catch some fish. 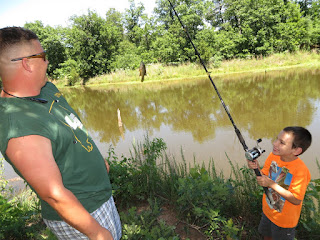 I took a couple of panoramic pics to capture the beauty of the scenery.  It was quiet and calm in a way rarely experienced in our normal city life. 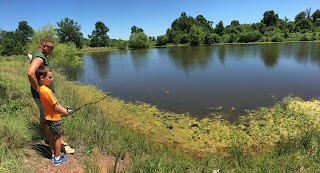 Joel helped Layla with the fishing basics.  She caught six fish!  All were catch-and-release, but each one was a thrill of it's own for her.  I don't think she'll become the next Bill Dance, but I'm grateful for those who have showed the twins life skills.  I was physically with them, but there are times like this when i prefer to step away from the hands-on teaching and let other men and women take the lead so they are comfortable taking instruction and correction from others. 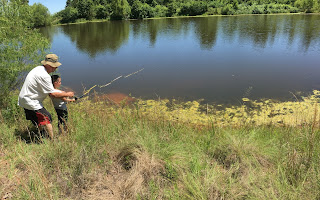 When we first stepped out of the truck by the pond Layla surveyed the landscape and zeroed in on the wild flowers.  She asked if we could pick them I gladly agreed.  We wondered through the chigger and tick infested section of weeds in order to get just the right mix of colors and styles.  Layla made it clear she was getting these for kendra.  by the time we arrived home the flowers were wilted and soggy, but the heart behind them was well received by her mommy. 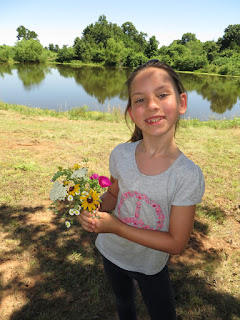 The twins and I rode with Joel through the small towns to run errands.  we found ourselves at the Meeker city hall, which was just a small building with a lone worker inside to officiate business such as permits and licenses.  I lived in Meeker for a year back in 1991.  Wow, that makes me feel ancient, but it's true.  We drove by the school i attended, the house i lived in, the church i went to, and even the corner store where i went for snacks.  Sharing these details with the twins was a great trip down memory lane for me and a good history lesson for the twins.  This is a little piece of where I come from. 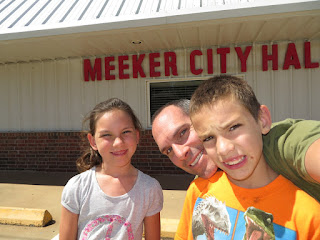 Towards the end of our trip we packed in the adventures so much that we were gleefully exhausted each night.  This was drastically different from the first few days where we stayed in our pajamas and accomplished as little as possible.  Turned out to be just the right combination of all the elements that make a vacation.  On the last day we went swimming in Meeker lake and took the jet skis out for some high speed fun.  68 miles per hour on the water is such a rush.  Kendra took Easton and I took Layla.  While Layla and I were trotting along the edge, we crossed paths with a water moccasin snake slithering through the water.  Layla was a little scared, but she didn't freak out at all.  I was proud of her bravery to just hang onto me and ride by it.

kendra and I didn't ride much together, but I convinced her to jump on with me for a minute to take advantage of the photo opportunity. 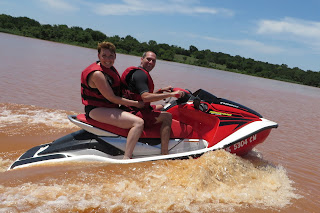 this will be one of the vacations we will never forget as a family.  it's the best of times and I'm grateful for every time we get to experience this much bonding at once.  it was the first time I've taken a full week away from work in over a year.  now it's time to celebrate life and live out some of the things Kendra and I have been dreaming of in the past few months.
Posted by The Four Webbs at 5:23 PM