Easton and Layla will be financially literate when they leave my house to start their own life.  There are so many people who get out of high school and enter the real world with no idea how to manage money and debt.  From the time the twins were four years old they have had a savings account.  Every time they get any money whether for birthday or chores or the tooth fairy (they know it's me, by the way) I taught them to give 1/3, save 1/3, and spend 1/3.  Those ratios are really difficult to maintain as an adult, but as kids who have no expenses it is very possible.

I came into the kitchen recently to find them counting the money in their save container, which they do from time to time.  Layla exclaimed, "I have over $100!" and Easton showed me his wad of cash too.  I decided it was time to turn those coins and dollar bills into a 100 dollar bill.  We used the local coin star in the grocery store to convert it and walked out with a crisp bill for each. 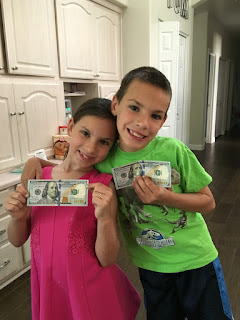 I'm proud of them for developing the skill of delayed gratification and avoiding temptation.  They know where that money is in the save container and they could access it at any time.  We don't put high up where they can't get it.  We put it right at their level to help them develop the skills.  I'd rather them make good or bad choices and reap the consequences (good or bad) at this age when the amount is just $100.  I'd be a foolish parent to sanitize their environment so much that they have the chance to make choices.  They are being taught to be powerful over themselves and their choices.

Easton wrapped up his first flag football season.  Here's a pic of him on defense going for the flag. 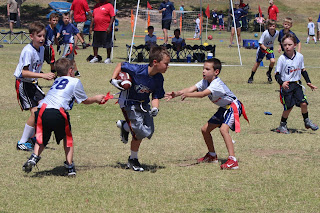 and here's his biggest play where he received a hand off and made some good yardage on the play. 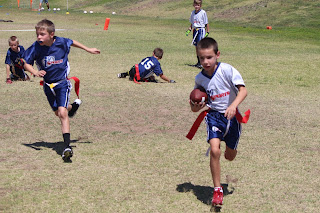 He did very well in the team environment.  I am impressed by his ability to receive coaching and follow instructions.  His coach was absolutely amazing.  I've been through several other seasons with the kids on various sports and I've never seen such a great coach as "Coach O".  I don't even know his name because that's what everyone called him... 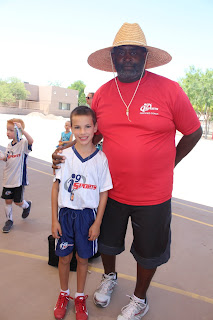 I was disappointed to see that every kid on every team won a participation trophy.  They were completely meaningless and don't represent anything other than proof that a kid showed up for a high percentage of games.  None the less, Easton was happy to get the trophy and close out the season with his new friends. 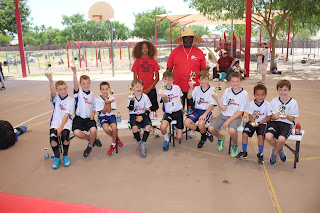 I'm not sure why Easton looks scared or worried in this next picture, but I at least should make it in one picture.  I took him to every game and every practice.  I cheered for him and sweated with him and practiced in the back yard with him.  He's worth it all.. 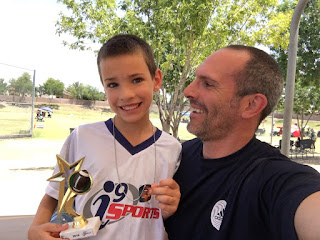 Layla graduated to "free skate 3", which probably doesn't mean much to those who don't know the skating system.  but to this girl it was cause for celebration!  She twirled around for five minutes during the spontaneous, open skate time at the end of each class.  I stood by giving her two thumbs up as I watched her show off for the new skaters.  She came by as I motioned to get a picture and then she smashed her nose against the glass. 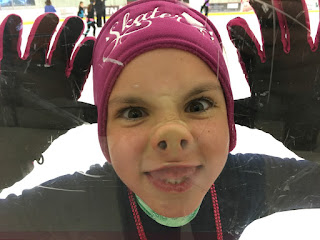 She's been skating so much during the past few weeks that i'm glad for her to have a break while we are on vacation.  Her passion for figure skating is burning brighter than ever and my job is just to fan the flame of whatever burns in her heart.

The 4 Webbs are adventuring in Oklahoma with Aunt Mary and Uncle Joel.  The stories and experiences already deserve their own post.