The 4 Webbs are in full Christmas mode with stockings hung by the chimney and scarfs hung on our necks.  I'm still working from my local office, but everyone else is kicking back relaxing.  Ouma and Oupa are spending priceless time with the twins, who are just barely small enough to kind of fit on their laps.  This may be the last year for curling up in anyone's lap because they are growing so tall.  Whatever happens for the next few days, this will be my favorite picture of the trip. 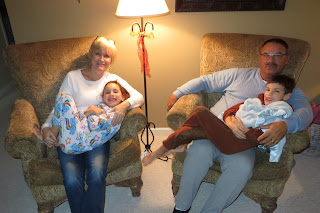 One of the many great characteristics of Kendra is her friendliness.  At church she met a new couple and swapped phone numbers.  When I arrived from Phoenix she said, "I met some new friends and we're going out with them."  OK...  Let's do it!  We met them out for coffee and they turned out to be very cool.  Brett and Heather have only been in Sacramento for five weeks and they have a baby so getting out for some adult conversation was just as valuable for them as it was for us.  Date night! 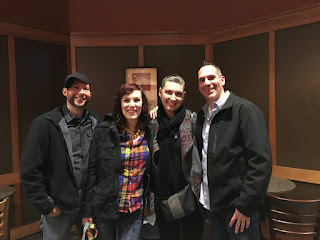 We've been looking forward to going to the Jesus Culture church together for months.  It was everything I hoped for and more.  The kid church people said they were going on stage to perform two Christmas songs.  They invited the twins to join them and we were excited for them to be a part of it.  They both did great on stage.  Even without prior notice or instructions they followed the motions well and sang along with all of their hearts. 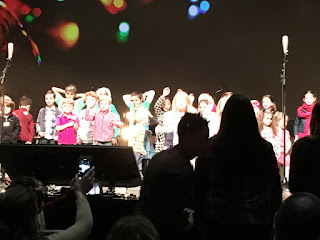 I stopped outside to get a picture of Kendra and I because it was a meaningful moment.  Last summer I attended here without Kendra.  There was still so much unknown back then that I didn't know if she would be healthy or physically able to travel to Sacramento.  Here she is, by my side, as a testimony of God's goodness and healing power. 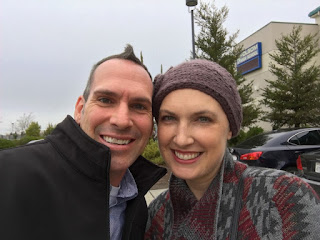 We went to Oupa's gym and used the scooters for some afternoon activity because it was so cold and rainy outside.  Easton happily pushed Kendra around the gym as we did our best to avoid crashing into walls. 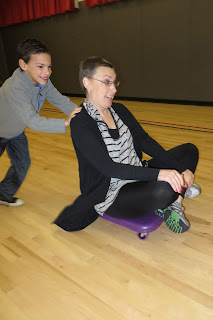 Kendra is not only healed enough to travel, she is participating in the physical activities like a champ!  Ouma is also in on the action this year.  The four of them raced across the floor in a spirited competition.  I am extremely grateful for the chance to watch scenes like this.  Seeing the picture never gets old for me because it's amazing how far Kendra has come and how valuable these moments are for all of us. 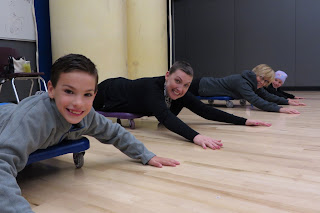 I don't know many grandmothers who get on the gym floor to join in the scooter races.  She's the coolest and Easton agrees! 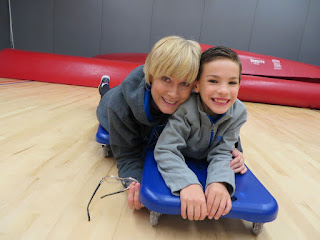 Another adventure we took was watching uncle Casey and Aunt Barbie play in the disc golf tournament.  Casey is no longer working there as of yesterday so it was kind of the end of an era for him since he's been around that scene so many years.  His new job won't allow for as much time on the disc golf course, but i'm sure he'll find time to play once in a while. 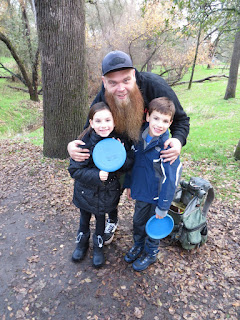 We followed Barbie for a hole also and cheered her on as quietly as possible for two seven-year-olds in the woods.  She won the tournament and we were privileged to see greatness in the making. 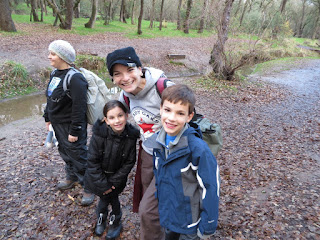 I've had all the work I can stand and it's time for some real vacation time starting now.  The rest of our days will be filled with visiting family around town and just spending time together.  The rain and cold weather is a welcomed change from our last many months in Phoenix.  Breaking out the Ugg boots and gloves is something to look forward to since we'll be back home in the sun very shortly.