The Webb house remodel is consuming 110% of our free time, but there is a light at the end of the tunnel.  The light is made up of hope that one day soon we will be able to choose what to do with our free time, for a change.

I am in Chicago on a business trip and the first free moments after work, meetings, emails, and social events happens to be at 1:00am.  Things will get better and I know this is just a season.  life will slow down.

The twins started their new school, the fourth 3rd grade classroom they will have.  They are in separate classes, which seems to be going very well for both of them.  Layla's teacher is a man and Easton's is a woman.  They are making friends and adjusting even better than I expected. 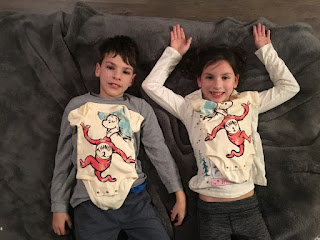 One of the constants in Layla's world is figure skating.  She goes every week and is progressing well.  She has a performance coming up in a few weeks and is learning her routine.  She grew out of her old skates and wore them out at the same time.  They looked like they were ran over by the garbage truck, but it's not a big loss since we bought them used in the first place.  We bought her a brand new pair of skates.  Here she is getting a lesson from Miss Dara. 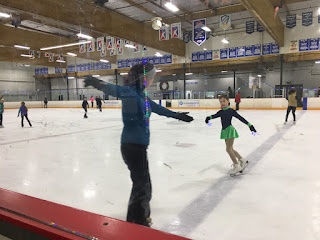 Meanwhile, back at the ranch...  Ouma and Oupa rang in the new year at our house.  This is a pile of moving paper that was stacked from the copious amount of boxes (750?) we emptied.  The twins were paid handsomely for helping Ouma with this big pile.  Layla kept her dollars and Easton spent his on Pokemon trading cards. 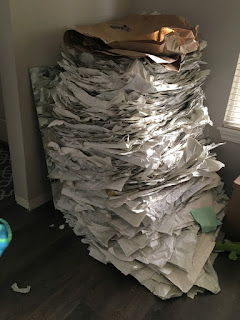 We had very few moments of rest or adventure during the holiday season because our moving process consumed every bit of strength and time for all 4 Webbs and Ouma and Oupa.  On the way to drop Oupa off at the airport we stopped at a local favorite.  There is a photo opportunity with the sign in front of the restaurant where Easton and I made some faces while others watched our silliness. 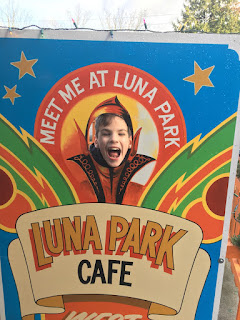 This place is known for their root beer floats.  The twins have never had one and Oupa is a big fan.  As it turns out, the twins loved them and Oupa proved to be an aficionado by giving it a so-so rating. 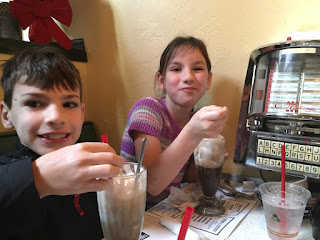 After days and days of diligent work, our kitchen looked even more like a war zone than the day before. 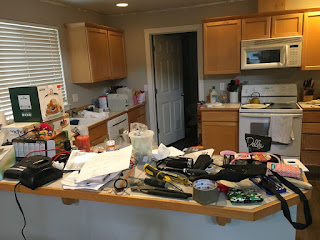 There was a break in the rain and snow long enough for me to get the kids out of the house.  I wanted them to have some form of activity and excitement since they were cramped up in the house while we all focused on the move-in.  I asked my neighbor where to take our dog and the twins.  He gave me the name of a park and off we went.  They climbed around on everything in sight.  This tree made for a nice picture too! 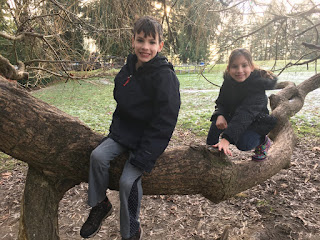 There was snow/ice/sleet lightly covering the ground, but that didn't stop them at all from playing on the playground equipment. 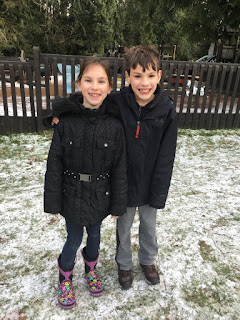 We stomped through the mud down a one-mile trail that led us by lake washington.  Another family was down there and their son was out on a limb... literally.  Easton immediately climbed up there and began to shimmy his way out to say hello.  I discovered something about him.  He can go as far as someone can show him how to go.  I am certain he would never have ventured out onto the tree over the water unless that other kid was out there.  However, since he proved it can be done relatively safely, Easton was eager and successful. 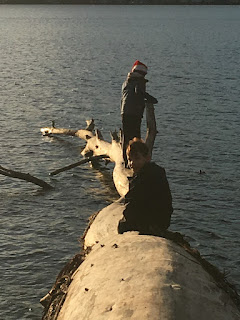 Layla had her rain boots on so she was not sure-footed enough to join him.  This is one of my favorite picture in the past few months.  because it shows how comfortable we are becoming with our surroundings. 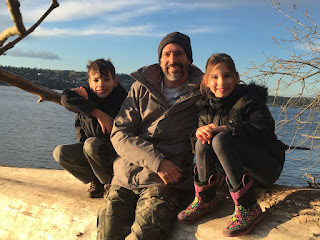 Even Max is starting to fit in like a native. 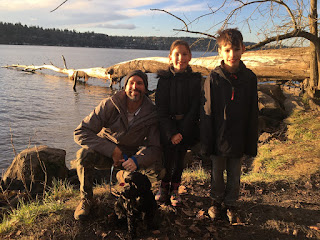 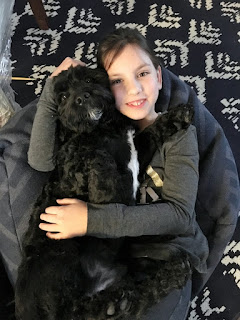 We were sad to see Ouma and Oupa go, but grateful for their love and support.  Neill and Jenny will be joining us for a few days and Kendra is doing her best to get our house somewhat livable by then.  having a place to sit in the living room and a shower to use would be a hospitable place to get to before then.